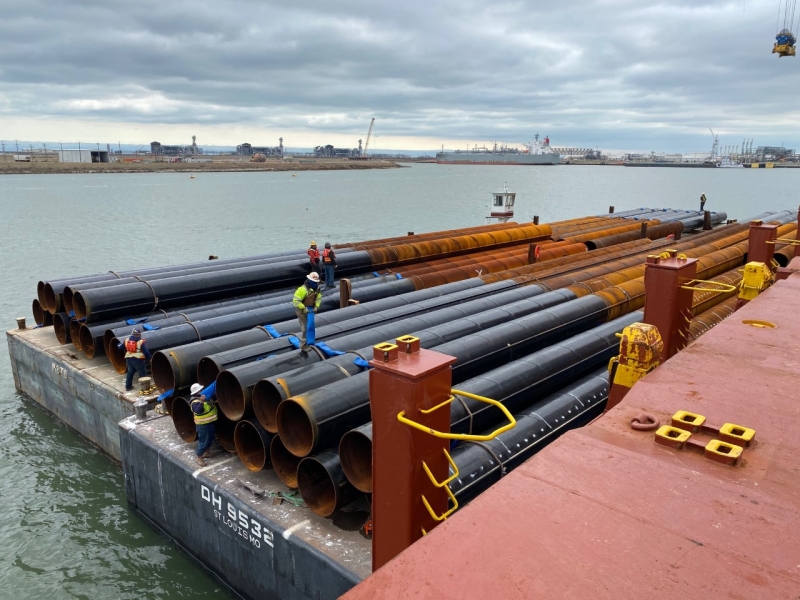 Installing pile in time for hurricane season at Port Freeport

Port Freeport, 60 miles from downtown Houston, is one of the fastest-growing ports in Texas and is undertaking expansion to handle an increased flow of goods. These projects include building new container terminals – including Berth 8 which is the single largest project built by a public port on the Texas Gulf Coast – and the $295M Freeport Harbor Channel Improvement Project. The Harbor Channel Improvement Project will deepen the waterway from 46 to 56 feet, making Port Freeport the deepest port in Texas and opening the state to larger ships. 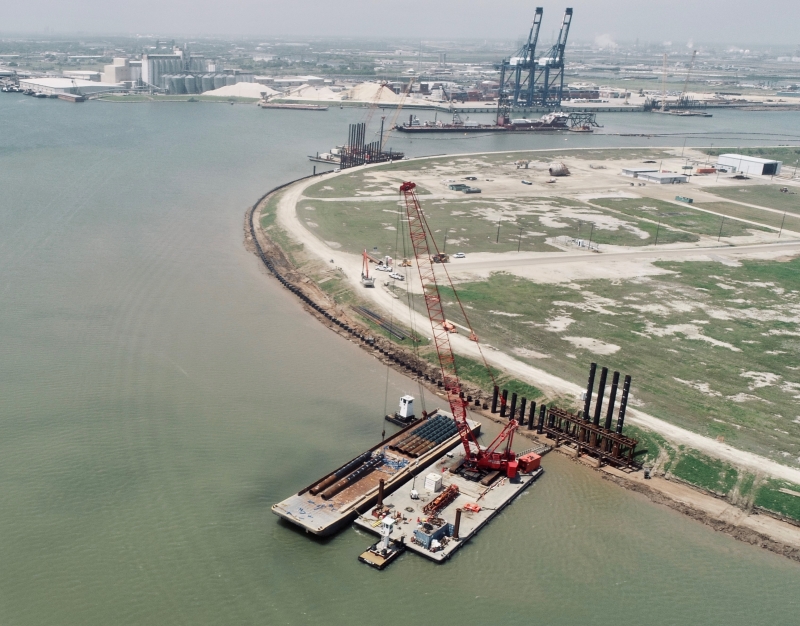 Before dredging could commence for the channel deepening and widening project – which started in earlier this year and will take five years to finish – a levee stabilization project had to be completed. The levee, of which ships navigate around the tip, is situated on the southern tip of the Dow Levee Road in the Freeport Harbor Channel. The channel widening and deepening project would call for the removal of the levee’s underwater berm, which is part of the Freeport Hurricane Flood Protection Project. To maintain levee integrity and protect the levee from flooding or undermining from dredging, rising sea levels, and potential hurricane washout, a stabilization wall around Dow Thumb was needed.

Port Freeport hired McCarthy Building Companies (which built Berths 7 and 8) to undertake the Harbor Levee Stabilization Project. The $29M project called for a 3,000-liner foot steel combination wall (combi-wall) that would “crown” the Dow Levee Road. The combi-wall consisted of 358 pipe pile and 357 sheet pile that reached a maximum depth of -88 feet. Due to the protective nature of the wall, it was critical that it be installed prior to June 1, the start of hurricane season. McCarthy had three months to complete the project in order to protect the levee from failure and to ensure channel operations should a storm hit. Further, the construction plan called for McCarthy to conduct the full scope of the project via the water working off barges with cranes on the decks. 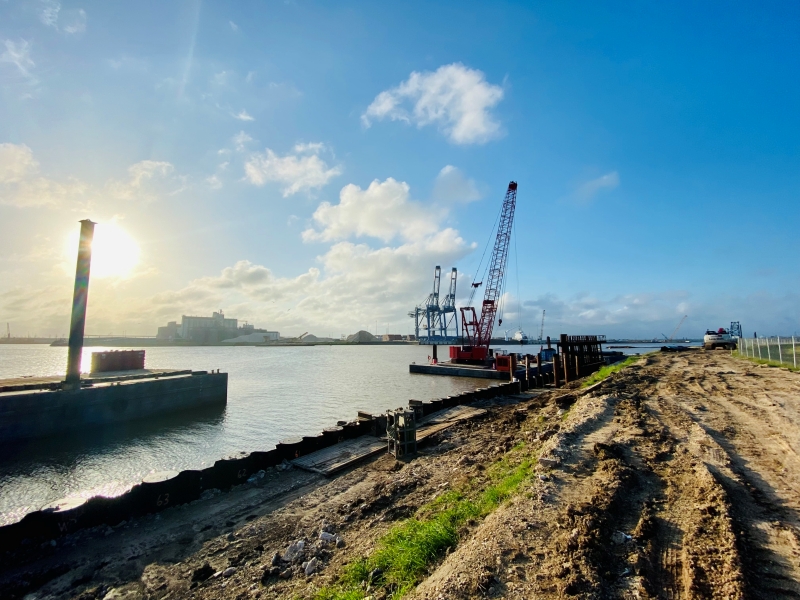 “The levee was constructed as a flood protection levee to protect the berths but with dirt removal underneath it, the levee could collapse. With hurricane season approaching, we had to fast-track the project. The risk of working over water in a tight channel in the event of a hurricane could be catastrophic, thus demobilizing the water-based equipment prior to possible hurricane exposure was a driving safety factor for everyone,” said Robert Wood, project manager for McCarthy. 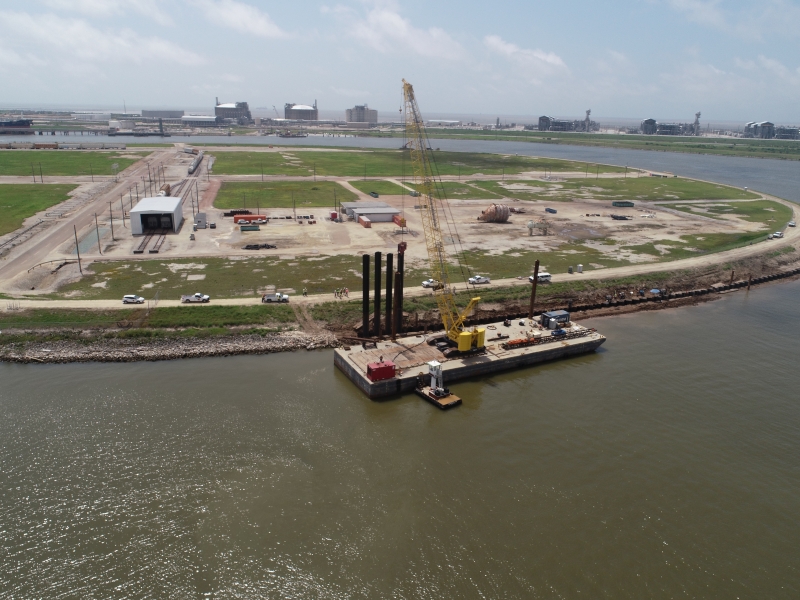 McCarthy planned for two pipe pile crews on two barges that would start in the middle – the point of the thumb – then work simultaneously in each direction – east and west. A third crew would then to go in to install the sheet pile and fill in while pile crews install pipes. Even best laid plans hit a snag: Piling production, ordered from Turkey, was delayed and delivery was late due to a ship grounding in the Suez Canal. 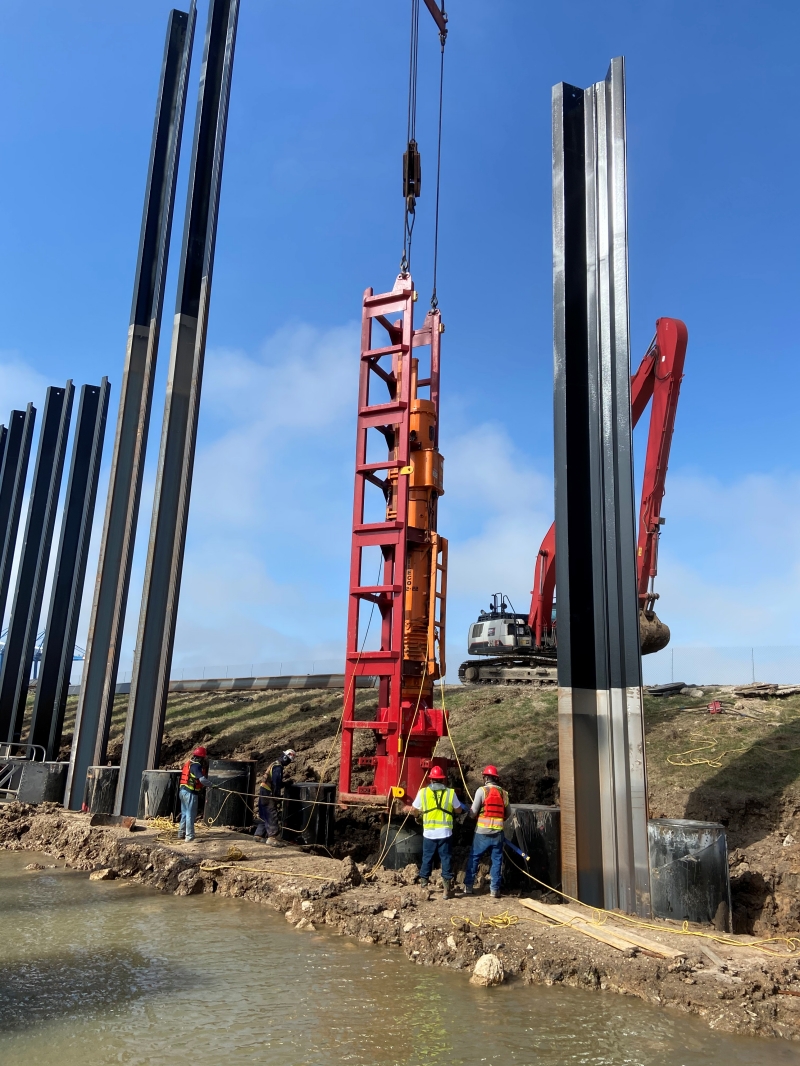 “Once we received the materials, we had just three months to complete the work so we shifted our plans to complete the east side of the wall first as it would be the first to absorb any hurricane impact,” said Wood. “We also employed three cranes on barges along with four other material barges to install the wall in the timeframe required.”

McCarthy also added a night crew, which via a barge, hammered piles to grade and drove the wall sheets to grade.

For efficient and faster installation, and to ensure quality, McCarthy employed two, 85,000-pound templates to set the piles. Typically, templates accommodate four or five piles but McCarthy built theirs to accommodate eight. Also, to accommodate the curvature of the wall, the end pockets were able to rotate 4.05 degrees to form a perfect semi-circle. Each template took two weeks to build but crews were able to install the 358 piles in half the time. The 42-inch diameter piles were 94 and 64 feet long and weighed 28,000 pounds. 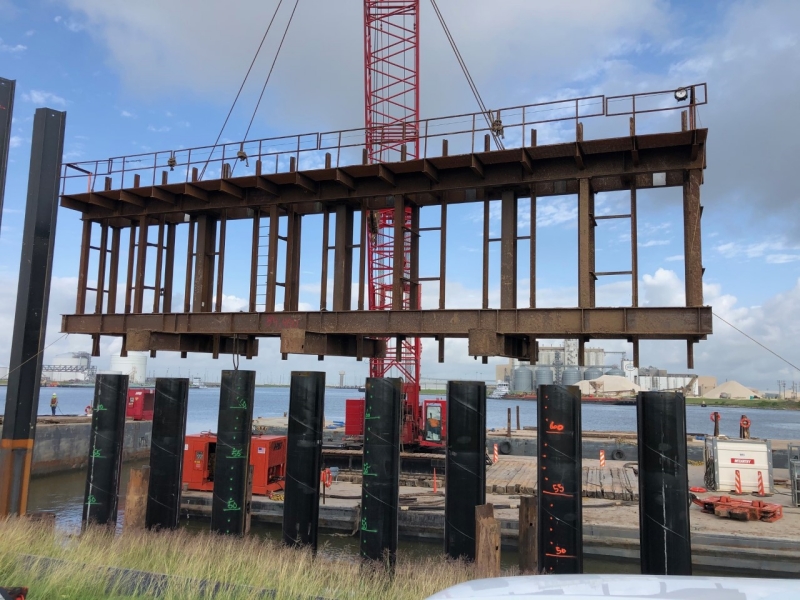 “It took two-to-three hours to reset the template and an hour to install the pile,” said Wood. “We had a stretch goal of maybe completing a template a day. Working 12-to-14-hour days, we were able to do two templates a day and then got fast enough that we did three in one day. That is 21 piles installed in 24 hours, that is extremely fast.”

Working with patience under pressure and experienced crews, McCarthy finished the project on time. A few months later, when Hurricane Nicholas took aim at Port Freeport, the wall was there to protect the levee. 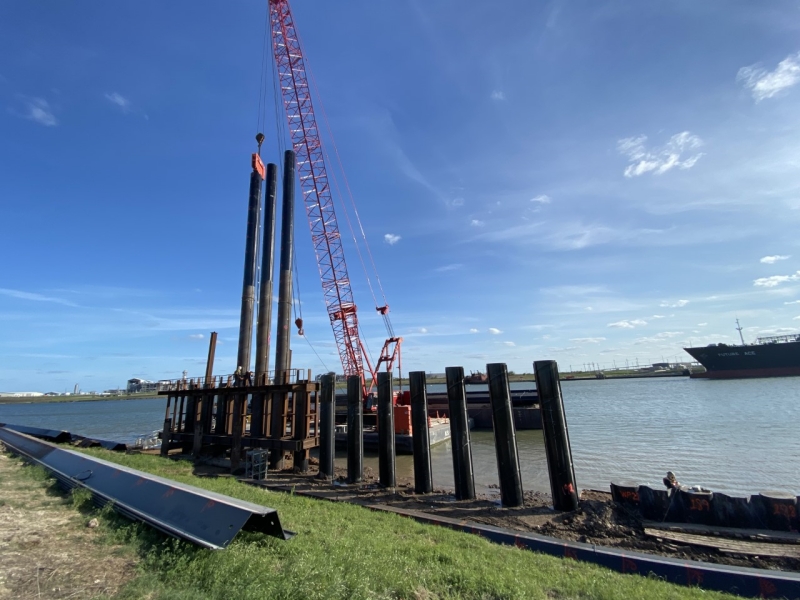