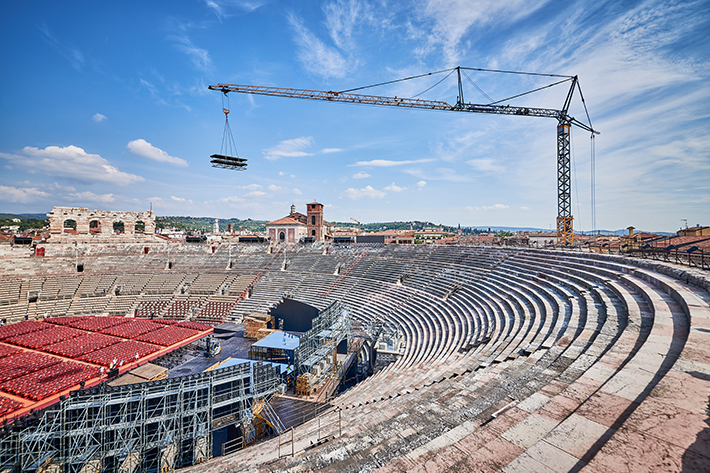 LED cubes instead of concrete blocks, Roman antiquity instead of modern apartments, culture instead of construction sites: Liebherr cranes help to build and dismantle sets, and are even sometimes part of the production, so that theatres across Europe are never left with an empty stage. From bottom- and top-slewing cranes to mobile construction cranes, various machine types have impressed with their intelligent assistance systems, long reach and high load capacity in Verona, Frankfurt and Bregenz this season.

Biberach/Riss (Germany) –  As soon as the stone steps in the ancient Roman amphitheatre are clear, the Liebherr 125 K starts to unfold itself. Its straightforward assembly, without the need for extra equipment, was one of the main reasons why the Italian Liebherr dealer Niederstätter opted for Liebherr’s largest fast-erecting crane for the Opera Festival held at the Arena Di Verona.

Various productions were staged over the summer months, which meant that the imposing stage sets had to be changed several times. The 125 K was unfolded and disassembled quickly to meet the requirements of this unique job. The crane was positioned directly on the ancient walls atop a six-metre gantry; a solution that minimised the amount of space required. A Liebherr LTM 1160/2 mobile crane lifted the fast-erecting crane onto the gantry and transported it back down at the end of the festival season.

The 125 K also made a big impression with its load capacity of 1,300 kilograms at maximum radius. Thanks to its reach of up to 55 metres, the bottom-slewing crane was able to cover the entire stage area and completed all necessary lifts with ease. Smart assistance systems, such as Micromove, supported the lifts, ensuring that the scenery was positioned safely and with precision. LED jib lighting also enabled trouble-free working at night.

Precision handling was paramount when a Liebherr MK 110 was deployed at Germany’s largest temporary open-air theatre. It was at the Sommerbau theatre on the city border of Offenbach and Frankfurt where the five-axle mobile construction crane, belonging to the Eisele AG Crane & Engineering Group, provided support for the production of “Dionysus City”.

The performance included several video inserts, which the event technology service provider Satis&Fy broadcast via a huge, 3.9-tonne LED cube. Even in windy conditions, the crane operator had to get the position exactly right so that technicians could take delivery of the cube both quickly and safely.

“The MK 110 was perfect for this task. Only this type of crane is capable of such precision handling,” says Lars Ulrich, project manager at Satis&fy. The infinitely variable and emission-free high-performance FC drive ensured smooth slewing. Even heavy loads arrived safely on the ground with the help of intelligent assistance systems.

Thanks to the MK series’ innovative design concept, it was possible to position the crane directly at the purpose-built open-air theatre and with an optimal view of the action. Both the tower jib concept and adjustable lift cabin were essential for ensuring high safety standards in the theatre. The ergonomically designed cabin also offered the crane operator a high level of comfort, which was important as each performance lasted up to ten hours. 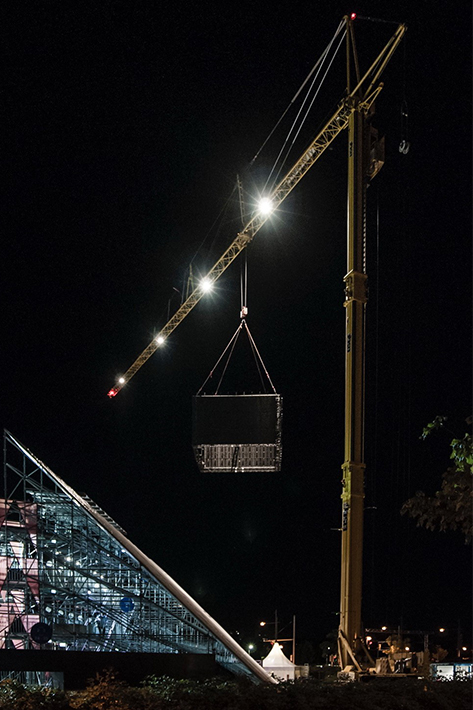 The clown’s head from the production of Rigoletto hangs suspended over Lake Constance; the spectacular new stage set belonging to the lakeside theatre Seebühne Bregenz needs a strong partner for its construction and dismantling. Which is why, at the end of August, divers anchored a Liebherr 150 EC-B 8 Litronic Flat-Top crane on piles driven into the lake floor, to provide it with a foundation. The crane’s task is to remove the Rigoletto scenery and help build the set for Madame Butterfly, ready for the new season. A job that is expected to take around eight months.

The crane stands 28 metres from the shore and an auxiliary crane with a 28-metre radius was involved in its assembly. Such a crane was sufficient for the task at hand as with Flat-Top cranes the hoisting height and lifting capacity of the assembly crane can be lower than with cranes with tower head. For Liebherr assembly engineer Thomas Wallner, it was quite an unusual assembly, “The biggest challenge was not being able to communicate with the divers the normal way.”

The undercarriage was assembled on land with partial ballast as striking pins underwater wasn’t an option. Swell and poor visibility under water proved challenging for the assembly engineers, divers and mobile crane operator as they worked to accurately position the undercarriage on the pile substructure. But thanks to their patience and strong teamwork they succeeded.

The 150 EC-B in use has an impressive maximum lifting capacity of eight tonnes. This allows the workshop responsible for the set to prefabricate as much of the scenery as possible; had a crane with a lower lifting capacity been chosen, there would have been significantly more individual parts. The tower crane can be seen against its picturesque backdrop until spring 2022. By then, the new set for Madame Butterfly should be in place, ready for the new festival season to begin.