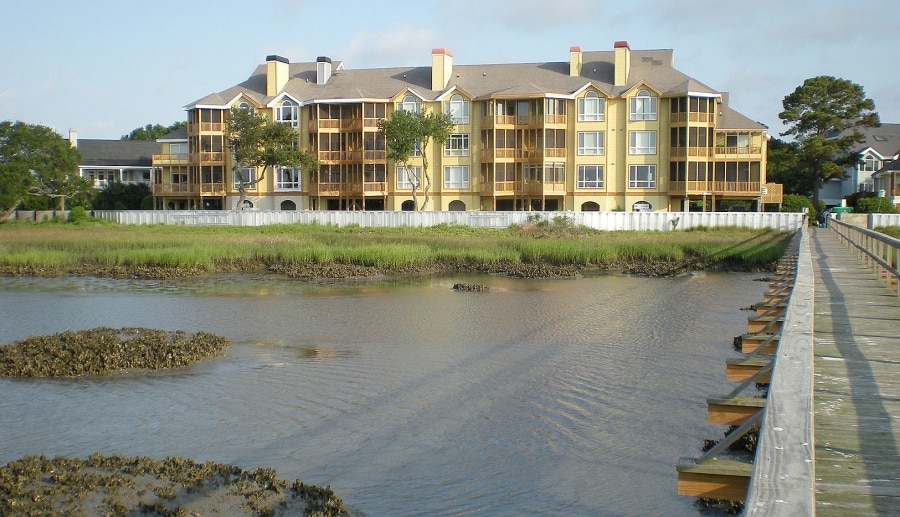 Since 2011, the residents of Simmons Pointe subdivision, in Mount Pleasant, S.C., have relished picturesque sunrises, tranquil sea breezes, and uninterrupted access to crabbing, fishing, kayaking, and other water-based activities.

The residents are now enjoying the peace of mind from flood protection thanks to the installment of a trip wall that, for nearly a decade, has protected the waterfront community, comprised of six condominium buildings with 55 units and 30 individual cottage-style homes.

The trip wall, which is a flood barrier installed in coastal areas for the purpose of reducing wave load on structures, was built with AlumiGuard™ sheet pile (PZH-159, PZM-16), a high-performance aluminum sheet piling produced by CMI. In addition to manufacturing the AlumiGuard, CMI also provided engineering support.

The wall was constructed by Cape Romain Contractors and the coastal engineering, planning, and design support were provided by Applied Technology & Management (ATM). Mount Pleasant resident and civil and structural engineer, Rick Lambert, also contributed to the project.

The structure has protected the subdivision and saved the residents hundreds of thousands of dollars in flood insurance premiums since being constructed. The wall has withstood numerous storms over the years, including the 10-plus inches of pounding rain and howling, 66 mph wind gusts generated by Hurricane Matthew in 2016.

The collaboration between the local Cape Romain and CMI, a national company, also has been beneficial for the waterfront residents of the Charleston area. The two companies have collaborated on multiple projects, including the first trip wall project in the area at The Tides Condominiums. The two companies also have worked on the 3,000-foot aluminum trip wall at Oyster Pointe in 2016 and the 2,400-foot Liberty Hill Farm trip wall, which is currently in construction.

“It has been a tremendous partnership,” says Clif Hough, Vice President of Cape Romain Contractors. “They [CMI] were with us every step of the way, through the bidding process and with the delivery process. Every delivery was right on time.” 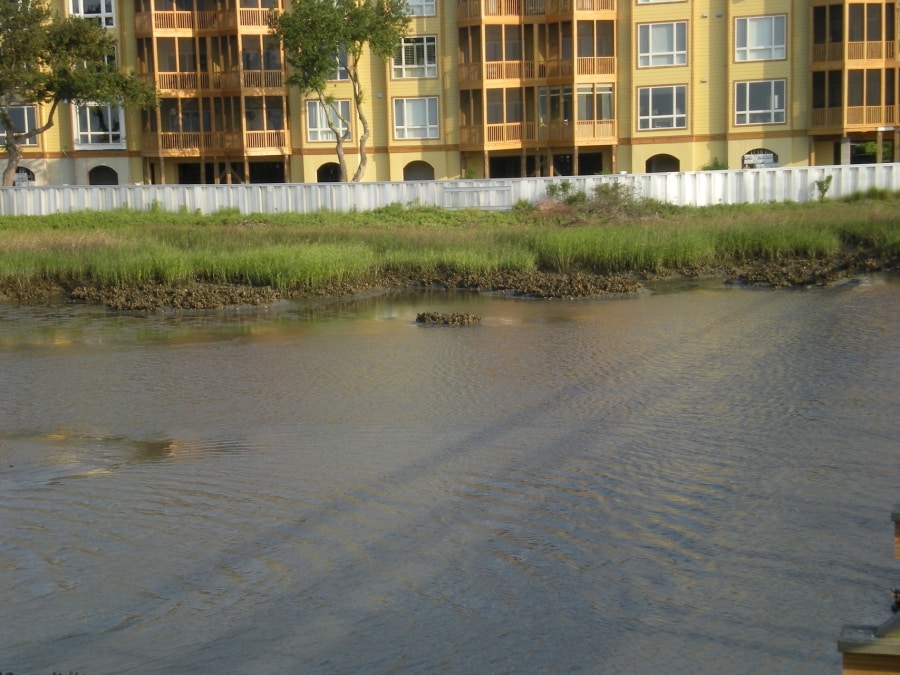 The Simmons Pointe community, located East of downtown Charleston, features access to the Intercoastal Waterway and the Atlantic Ocean; however, it was the proximity to deep water that proved to be a detriment to the residents of the luxury condos, constructed in the early 1990s.

The Federal Emergency Management Agency (FEMA) had remapped Mount Pleasant and determined Simmons Pointe to be in a “high-risk flood zone. The subdivision was categorized as FEMA Zone V, meaning the coastal area has a 1 percent or greater chance of flooding and an additional hazard associated with storm waves. The area also had a 26 percent chance of flooding over the life of a 30-year mortgage.

As a result of this designation, homeowners could expect an escalation in their flood insurance premiums. Some estimates were as high as 900 percent, sending yearly premiums skyrocketing to more than $400,000.

The unaffordable premiums sent Simmons Pointe residents scrambling for a solution that revealed itself four miles down the road at the Tides Condominiums.

Needing to generate a long-term flood control solution, the residents of the Tides Condominiums built a trip wall in 2007, using CMI’s AlumiGuard and ArmorWare™ (SC-9, SC-15) Cap. Marine-grade aluminum was the preferred sheet pile material for the owners and residents of the Tides because of its corrosion resistance, long service life, and low maintenance it offered in the harsh marine environment. The AlumiGuard sheet piling was manufactured at CMI’s aluminum fabrication plant in Sanford, Fla.

The Tides Condominiums trip wall was the first structure of its kind in the Coastal Carolinas and required 32,600 square feet of AlumiGuard sheet pile.

Following the success of the Tides’ trip wall, the Simmons Pointe Homeowners Association (HOA) selected the AlumiGuard solution to cut down on their exorbitant flood insurance premiums. and selected ATM, Cape Romain and CMI to design the 1,483-foot aluminum sheet pile trip wall around the perimeter of the Simmons Pointe condos.

The construction cost a little more than $1 million, but it downgraded the condo site from a flood zone V designation to flood zone A according to FEMA and the National Flood Insurance Program (NFIP). The trip wall has impacted residents’ wallets by compounding annual savings as well as protecting the property for the last decade.

CMI was also able to design and fabricate an aluminum flood gate that provides easy access to the water when it is pinned open but closes securely and offers protection from storm surges and other severe flooding events. 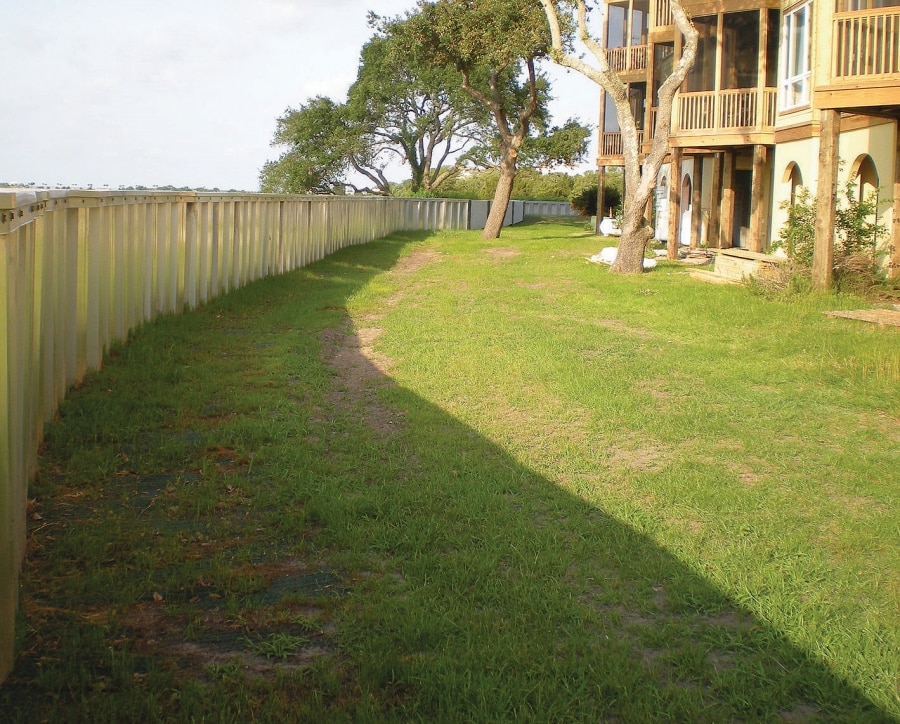 CMI’s AlumiGuard was the ideal choice for the harsh marine climate of the Charleston area. Aluminum does not corrode in salt water and develops a chemical defense system when exposed to the elements. It is also one of the better metals for distributing heat, even in direct sunlight.

“Trip walls are relatively unique to the Charleston area,” says Jason Jones, the Regional Sales Manager for the mid-Atlantic coast at CMI. “We’ve obviously completed plenty of flood walls, but the unique purpose of a trip wall has been centered around the Charleston region. We will see more of these projects with the rising sea levels, increasing development, and updated FEMA flood maps coming out.”

The Simmons Pointe trip wall consisted of more than 1,000 feet of AlumiGuard. Cape Romain Contractors used a 30,000-pound crawler crane with a vibratory hammer to drive the AlumiGuard 16 feet deep into the soil, comprised of sandy clays and high plasticity index (PI) organic clays. The 6-foot cantilevered trip wall does not interfere with the residents’ view.

However, the project did present some environmental issues. Environmental restrictions required several old oak trees to be kept intact along the proposed flood wall line.

Additionally, the South Carolina Ocean and Coastal Resource Management (SCOCRM) would not allow trenching in order to discover and avoid tree root systems along the proposed path.

As a solution, engineers decided to simply go around the trees and use small sections of concrete panels supported by “H” steel beams. Contractors cast and installed 470 feet of eight-inch-thick concrete lagging wall on the ground to avoid disturbing the root systems and preserving the heritage oaks. The installation team attached coated concrete sections to the already installed concrete panels and then installed CMI’s marine-grade ArmorWare aluminum cap on the AlumiGuard section of the wall. 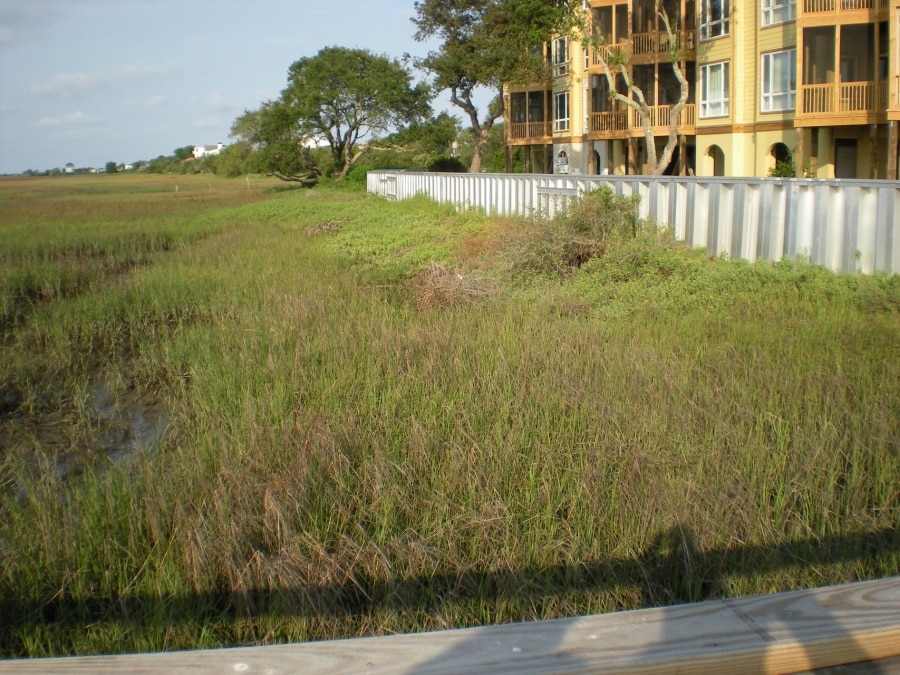 “Obviously, the trees were an issue,” Hough says. “We also dealt with some tight quarters, with the condos being so close to the edge of the marsh.”

The installation was completed April 2011 and is still in operation today. Not only are residents of Simmons Pointe protected from flooding, they also have seen their monthly premium payments decline, saving hundreds of dollars a month per resident.

“Initially, we were having enormous insurance bills,” says John Collins, a former resident and HOA President at Simmons Pointe, who spearheaded the trip wall project. “We did a lot of research on insurance and learned that we could pay off the cost of the wall installation within a year and get a rebate on our entire flood insurance and that saved the community close to a million dollars collectively. It really worked out.”

CMI is continuing to stay busy in the Lowcountry.

This option provides an alternative to corrugated sheet piling for seawalls, retaining walls, flood protection, and water control, while maintaining the aesthetics of the Lowcountry’s long preferred wood walls. The second phase of Kiawah River’s trip wall, consisting of up to another 3,000 linear feet of ShoreGuard Flat Panel Sheet Piling, began this spring.