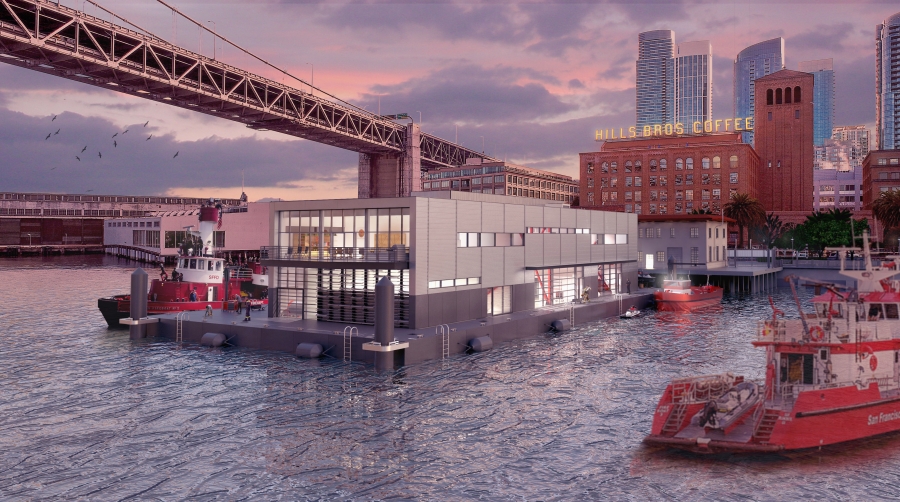 Seemingly overnight, a new structure appeared on San Francisco’s waterfront. Situated at Pier 22½ just behind historic Firehouse 35 and nestled beside the Bay Bridge, this floating building is San Francisco’s new Fire Station 35. The facility is an answer to the city’s long-awaited need for updated fire and marine safety on the Bay.

The overnight materialization of Fire Station 35 on San Francisco’s waterfront was due to the method in which it was built. To reduce public impact and avoid disruption along the bustling Embarcadero, the float and other marine components were delivered to nearby, and less occupied, Treasure Island where building construction took place. Once complete, the 14,900-square-foot-buiding, was pushed across the Bay to Pier 22½ during the night when winds and traffic on the Bay would be low.

Constructing the station on top of a float was the solution to some critical future scenarios; climate change and risk of a major earthquake. Being permanently moored to four steel piles, the building will rise and fall with the tides and seamlessly adjust to sea-level rise. The design of the steel float and its independence from land ensure its ability to withstand a major earthquake and continue to function as a maritime command center. 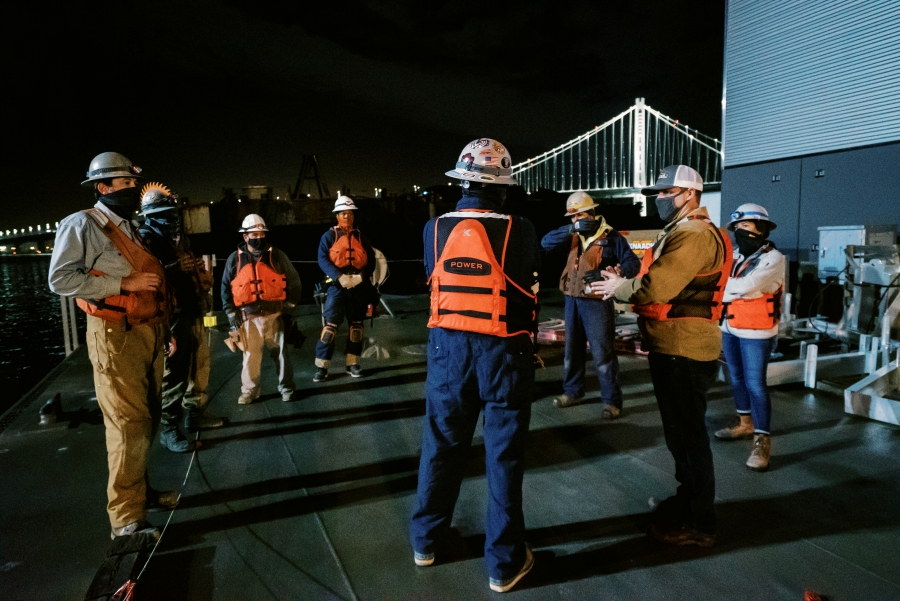 “I am certain that the new Fireboat Station 35 will become the pride and joy of the people of San Francisco,” said Magdalena Ryor, Project Manager for City and County of San Francisco Public Works. “It is not only an architecturally pleasing structure, but it is an engineering marvel designed in response to looming climate impacts.”

The new facility fulfills many long-await needs of the Fire Department. It brings all the Fire Station 35 rescue assets into a single location with immediate access to rescue vessels and equipment. There is mooring for four boats and provides a driveway onto the float for ambulances and other emergency vehicles. The building provides increased accommodations for 24-hour SFFD staff from seven to twelve. And, for the first-time, offers female firefighters separate and equal accommodations.

When asked about the most interesting part of this project, David Mik, President of Power Engineering Construction Co. (and former U.S. Naval Officer) says with enthusiasm, “The way we built the access ramp. It’s designed after a Ro-Ro ramp on large oceangoing vessels which allows cargo to be rolled on and off at Port. What this did for Fire Station 35 is provide vehicular access to ambulances throughout all tidal changes, sea conditions, and seismic events.” 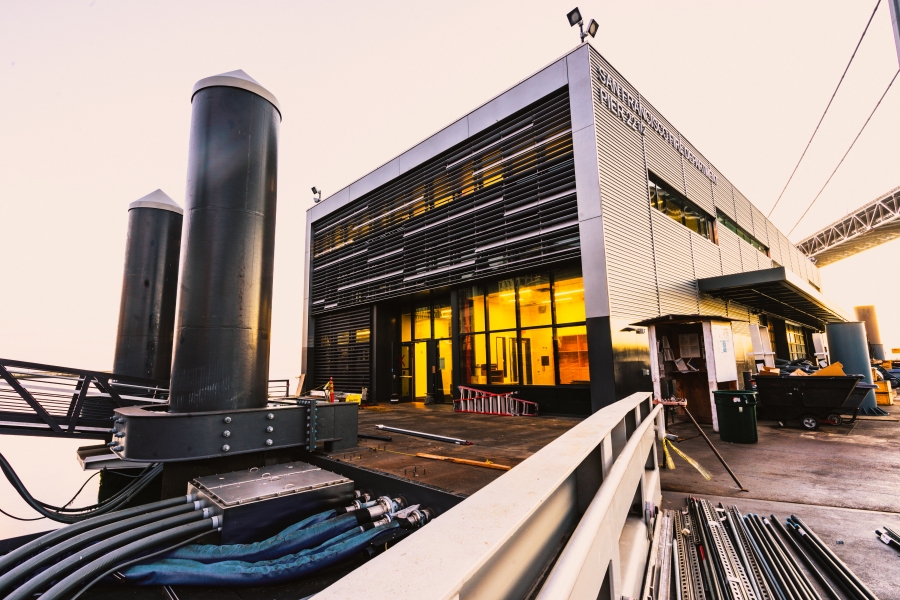 Erik Soderberg, S.E., from Liftech comments that, “The biggest engineering challenge was the dichotomy of design criteria. The float needed to be robust enough to support a 2-story building, last 50-years with no need for dry dock and remain functional after an earthquake. All this while providing a minimal movement experience for the fire fighters living onboard.” He goes onto say, “The design element that made all of this work is a dampener system we came up with on the pile design. It’s a combination of reinforced rubber pads sandwiched between steel plates that provide significant compression and cushioning. This system reduced the acceleration (impact of the float on the pile) by up to 90%.”

Simultaneous to design was the entitlement process. Expanding over the water was a solution to lack of land, however, in San Francisco where encroachment into the Bay is highly protected, the entitlement process was complex. The project was reviewed by 17 different agencies ranging from neighborhood advisory committees to The Port of San Francisco and ultimately approved by 9 different agencies including San Francisco Bay Conservation and Development Commission (BCDC) and US Army Corps of Engineers. 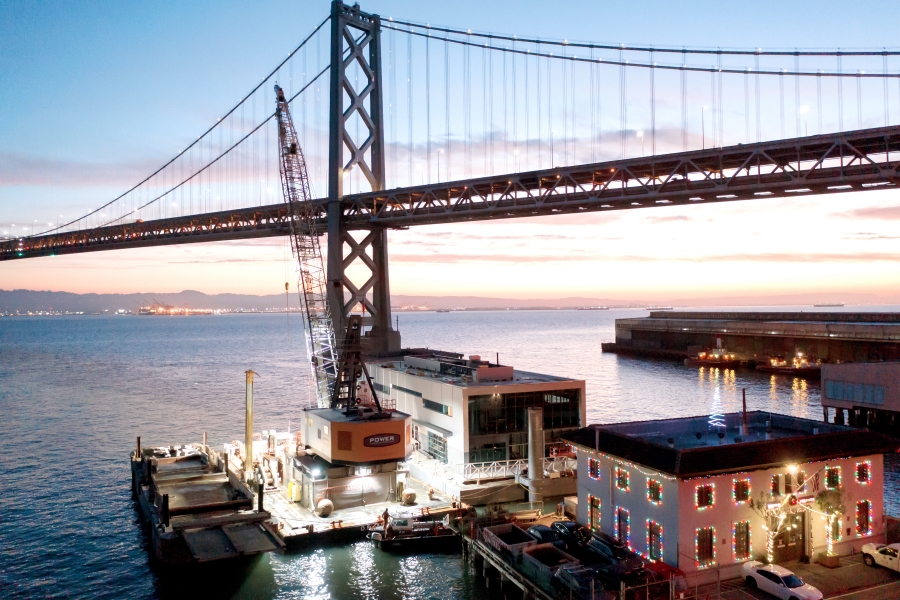 “Being a first-of-its-kind, essential facility, in a historic location, this was uncharted territory.  What I am really proud of is how our team performed. The complex entitlement process, intertwined with stringent design criteria and budget, required exact planning, documentation, and execution every step of the way,” says David Mik.

The floating Fire Station was a collection of creativity and persistence from its inception by the City and County of San Francisco Public Works to its completion by the Swinerton-Power JV team made up of Power Engineering Construction Co., Swinerton, Shah Kawasaki Architects, and Liftech Consultants.