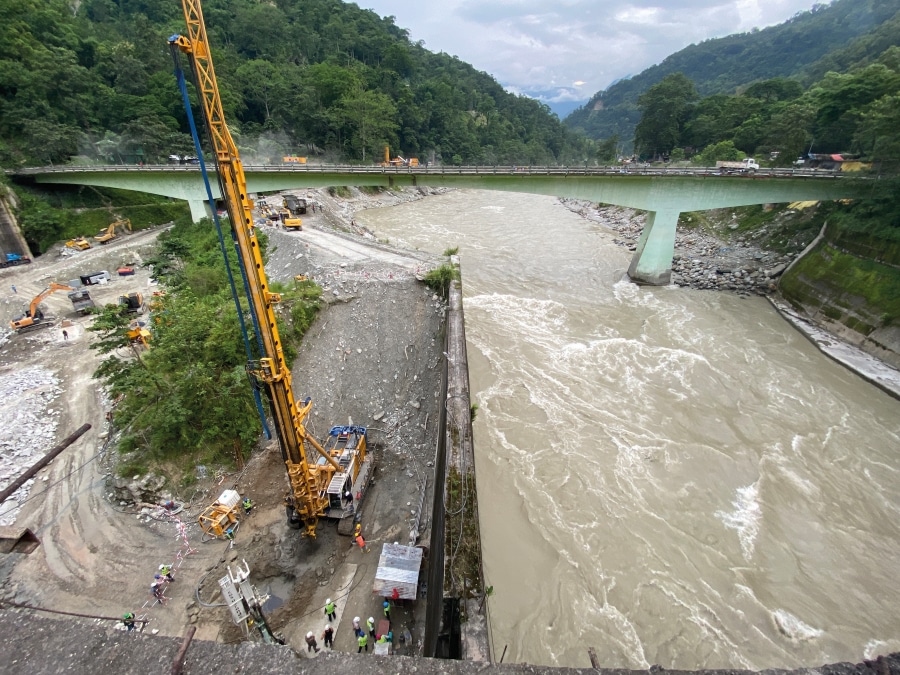 Singtam, Sikkim, India – BAUER Engineering India Private Limited, a subsidiary of BAUER Spezialtiefbau GmbH, was tasked by Jaiprakash Associates Limited with execution of specialist foundation engineering and geotechnical work for the Teesta VI Hydro Electric project. The project developer is M/s. Lanco Teesta Hydro Power Limited, a wholly-owned subsidiary of the National Hydro Power Corporation of India. The project will be realized in the town of Singtam on the Teesta River. This river, which is more than 300 km long, rises from the Pahunri Glacier at an altitude of more than 7,000 m in the eastern Himalayas before flowing through the Indian states of Sikkim and West Bengal until it joins the Jamuna River at Fulchhari in Bangladesh.

Scope of works executed by BAUER Engineering India Private Limited include construction of an anchored pile wall, consisting of around 10,000 running meters of piles with a diameter of 800 mm, as well as around 60,000 running meters of anchors. The anchored pile wall will enable a 40 m deep excavation for the intake structure on the right bank. Along the upstream cofferdam 4.700 m² of grout curtain will be constructed using the jet grouting technique. In two individual stages on the upstream side of the barrage 4,600 m² of diaphragm wall will be built, using a trench cutter through the bouldary alluvium after pre-treatment.

“Due to the special location of the Teesta River, it is proving challenging to both harness hydropower and also protect local residents against flooding,” says Harish Agarwal, Senior Vice President of Jaiprakash Associates Limited. Another challenge poses the limited space on site due to the relatively narrow valley and steep slopes as well as working in close proximity to an existing barrage. Construction works also will be executed through substantial bouldary strata and under erratic flooding pattern in the river.

The work executed by Bauer started in April this year and is expected to be completed by fall 2024.