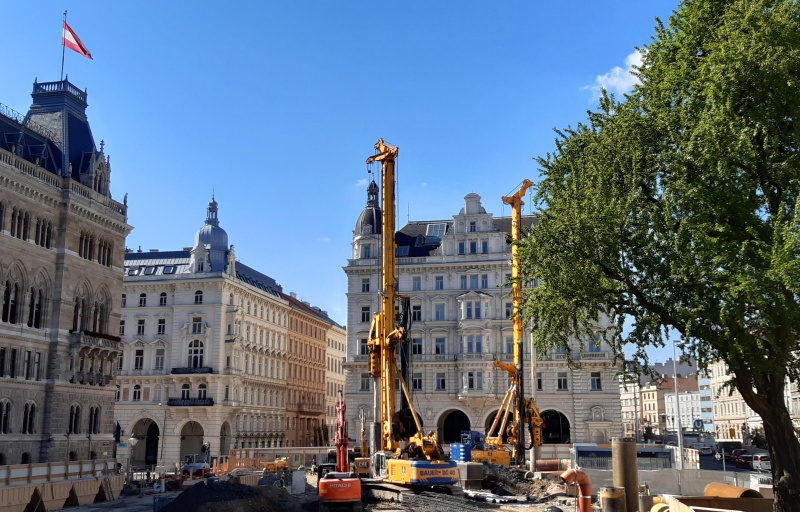 Vienna, Austria – Vienna’s public transport network currently encompasses approximately 1,150 km, five subway lines, 28 tram lines, and 131 bus lines carry passengers to their destinations. As one of the most important infrastructure measures in Vienna, the subway network is being modernized with a new route layout for the U2 line as well as the construction of the new U5 subway line. The expansion of the U2xU5 line crossing will be carried out in two construction stages, whereby the first construction stage includes the extension of the U2 from the “Rathaus” station to “Matzleinsdorfer Platz” along with the U5 from “Karlsplatz” to “Frankhplatz”. The subsequent second stage of construction, which involves the construction of the U5 stations until “Hernals” and the U2 stations until “Wienerberg”, is currently in the planning phase.

BAUER Spezialtiefbau Ges.m.b.H., the Austrian subsidiary of BAUER Spezialtiefbau GmbH, was commissioned by the joint venture U2xU5, comprising the companies Swietelsky AG, HOCHTIEF Infrastructure GmbH and HABAU Hoch- und Tiefbaugesellschaft m.b.H., to construct approximately 35,000 m of piles with diameters of 620 mm, 880 mm, 1,180 mm and drilling depths of up to 61 m for nine shafts and station structures in the middle of the city center of the Austrian capital (contract sections U2/22 & U5/2). For this purpose, up to five large rotary drilling rigs are being mobilized in the period from April 2021 to fall 2022.

The prevailing geology in the project area is characterized by deposits from the Vienna Basin (Miocene), which are overlaid with backfill, loess loam, and water-bearing quaternary gravel. In contrast to the contract sections between the U2 stations “Matzleinsdorfer Platz” and “Neubaugasse”, where the line tunnels under construction are generally in Miocene (“Wiener Tegel” soil) layers, the tunnel axes in the area where Bauer Spezialtiefbau is carrying out work between “Rathaus” and “Schottentor” are situated in the water-bearing quaternary layers. Due to these connected free bodies of water in the quartz gravel, in combination with the confined groundwater of the sandy Miocene layers, bored piles embedded into Miocene layers generally have to be constructed under water load. 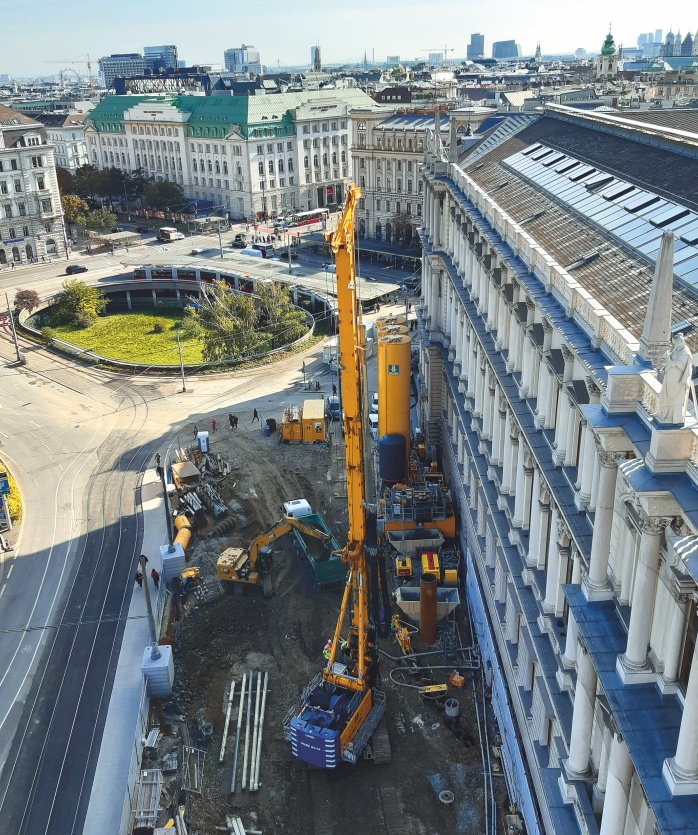 When it comes to the construction of the bored piles, the subsequent construction tasks and expansion work in most construction sections require compliance with higher tolerance requirements compared to the standard. Requirements include drilling precision with a maximum tilt deviation of 1% with respect to the drilling depth from the drilling surface, and the use of a drilling template that must be constructed precisely at the approach level down to +/- 3 cm.

With regard to the later use of the structures, in order to prevent any interference currents during subway operation, at least 10% of the maximum reinforcement cross-section for all reinforcement cages must be electrically through-connected and integrated into the overall structure. The connections between the reinforcement bars, which are overlapped by up to five cage sections per pile, are carried out by directly welding the reinforcement bars using a 4 cm welding bead during the installation process on the construction site.

The highlight of the work is the construction of the deepest bored piles ever executed in Vienna on the “Schottentor” connecting structure – with diameters of 1,180 mm and a drilling depth of 61 m. Due to the new route layout, an expansion of the tunnel is required, whereby the piles take on different functions depending on their corresponding groups. For example, the contiguous pile wall on the side of the university will replace the diaphragm wall that was removed in this area and additionally divert the loads resulting from the extended support span into the subsoil. The high load concentrations resulting from the static side conditions and load redistributions make it necessary to construct a 2-row pile group in the “Universität Ost” area and to construct 55 m long piles with a drilling depth of 61 m in the area “Universität Mitte”, which will subsequently also form a part of the tunnel wall.

Based on the prevailing soil conditions in this partial section, the deepest piles in Vienna with a drilling length of 61 m will be partially cased up to depths of approximately 30 m, and beyond that under bentonite support. Given the ambitious predefined construction schedule, one 61 m pile per working day will ideally be constructed on this section under challenging, very limited spatial conditions in 2-shift work using a BAUER BG 45 drilling rig. 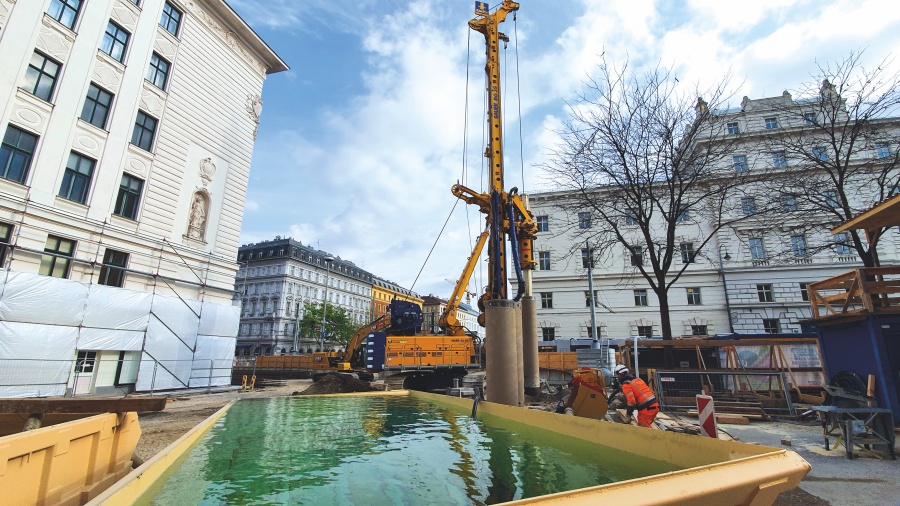 Thanks to the use of the digitalization software “b-project” from BAUER Spezialtiefbau GmbH, all pile construction data are collected and processed electronically. In addition, a process-oriented construction/production system is applied using the BAUER Construction Process, with the aim of guaranteeing the efficiency of all processes on an ongoing basis.

By the end of the 2021 calendar year, approximately 75% of the commissioned services were concluded on schedule. During the current year, additional work will be continued in the area between “Universität” and “Votivpark” as well as on the shafts for “Landesgerichtstraße”, “Schwarzspanierstraße” and “Frankhplatz Süd”.