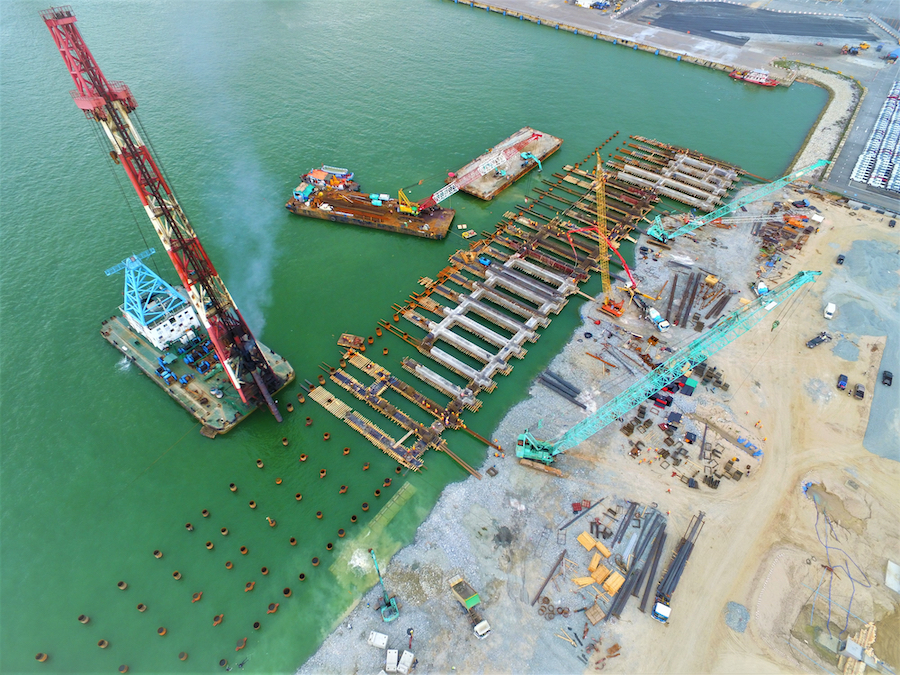 There is a wide range of performance levels among both readily biodegradable and petroleum-based lubricants and greases. Customers have a wide array of options from lower performance lubricants and greases to high performance synthetic lubricants and water resistant, extreme pressure greases. While care must be taken in choosing the appropriate lubricant or grease for the specific application and operating environment, Environmentally Acceptable Lubricants and Greases (EALs) also offer the full continuum of performance. It’s important to know that some Environmentally Acceptable Lubricants offer outstanding performance in addition to being safer for aquatic environments – such as US territorial waters, US waterways and civil works sites – applications explored in this white paper in greater detail.

The Clean Water Act of 1972 mentions discharges of oil should not exhibit any visible ‘sheen’ on the water’s surface as it is otherwise considered as a pollutant (according to CFR 40 Part 435 A).  By executive order, the US Army Corps of Engineers is required to comply with the Clean Water Act.1

Under the EPA’s 2013 Vessel General Permit (or VGP), all ships larger than 79 feet must use Environmentally Acceptable Lubricants in oil-to-sea interfaces when operating within the three nautical mile limit of the United States and in the Great Lakes unless technically infeasible. These regulations also include directives regarding vessel discharges such as oil, wastewater and runoff. On board applications include above and below the vessel’s waterline.

The EPA VGP requirements can be a useful roadmap for operating in or adjacent to aquatic or other sensitive environments.  Use of EALs can reduce overall operating risk, enhance environmental responsibility profile of operators and choice of the right EAL can also enhance a company’s overall sustainability position. 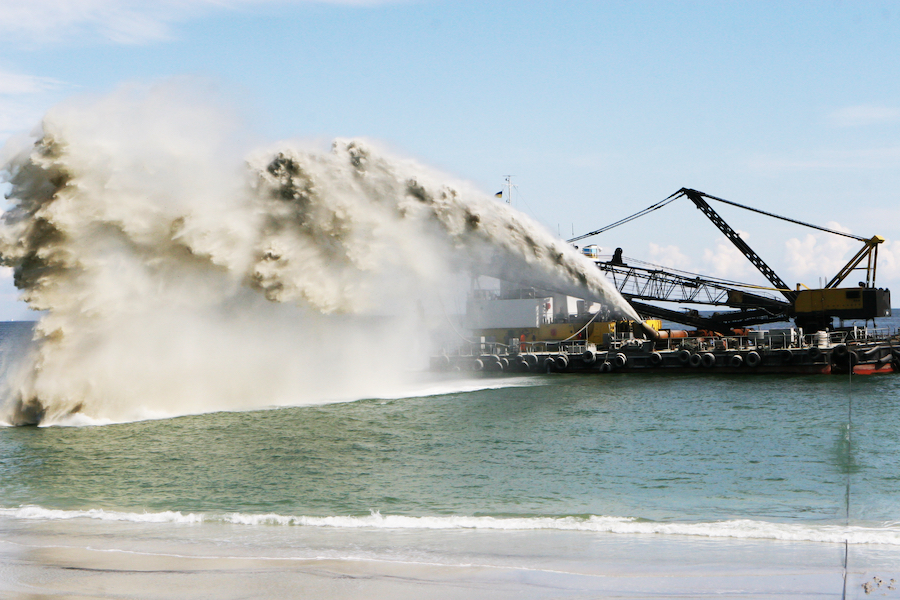 Environmentally Acceptable Lubricants are defined by the EPA as offering these three characteristics. First, they must be “biodegradable” as defined within the VGP¾biodegrading into carbon dioxide and water by ≥60% within 28 days (according to OECD 301B or ASTM D7373 methods). Next, they must be “minimally toxic,” causing only a light impact on the aquatic environment (LC50> 100mg/L for lubricants and LC50>1000mg/L). Lastly, they are “not bio-accumulative,” and must have a low propensity to bioaccumulate in organisms and meet the specific requirements set forth within the VGP definition of “not bio-accumulative”.

Environmentally Acceptable Greases are also defined as minimally toxic to the environment, not bio-accumulative and biodegradable by 60% within 28 days.

The US Army Corps of Engineers Headquarters and the USACE ERDC Dredging Operations Technical Support (DOTS) program commissioned a study in March 2018 with The Inland Navigation Design Center (INDC) with the objectives of:

1) reducing risk to equipment by selecting the right lubricant

4) educating on EALs including selection and monitoring

5) advising on pilot studies to refine use of EALs at USACE sites.

Although this report focused on navigation, the INDC team emphasized that the study findings are also directly applicable to other USACE civil works applications including hydropower, flood control dams, reservoirs, and floating plant applications. 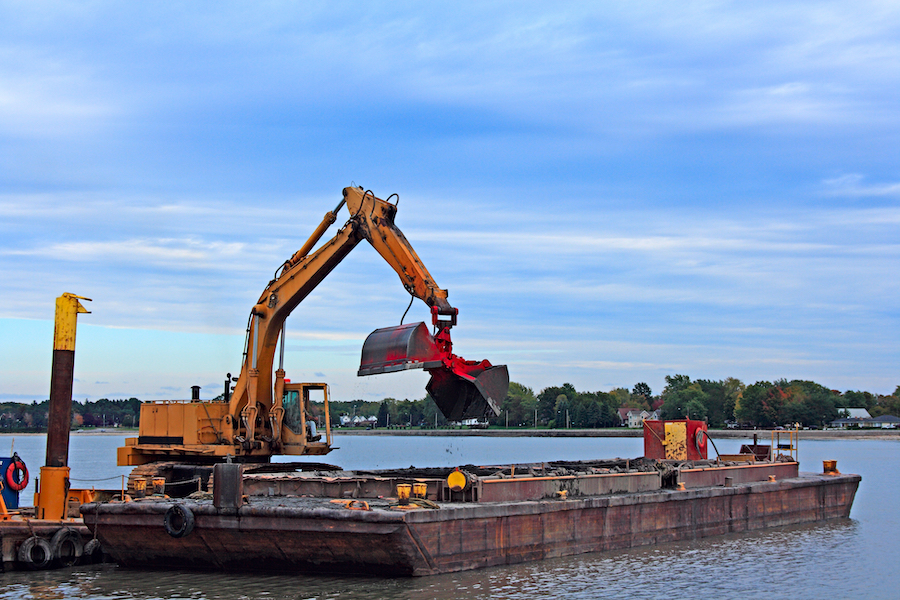 USACE HQ definition of an EAL

The lubricant or grease must be Biodegradable (ASTM D5864 recommended), minimally toxic (EPA 560 or OECD equivalent or practically nontoxic according to US Fish and Wildlife Service), and non-bioaccumulative (OECD 107, 117).

Where to Use EALs

According to US EPA, EALs should be used in place of traditional petroleum lubricants in all marine applications where there is any oil-to-water interface. These applications include stern tubes, controllable pitch propellers, stabilizers, rudders, thrusters, Azipods, towing, notch interfaces, wire rope and mechanical equipment subject to immersion such as dredges and grabs.

According to the USACE report, key applications where EALs can be readily integrated including civil works include hydraulic drive systems and grease applications (especially open gearing and wire ropes). Hydraulic Fluid power systems transmit and control devices to perform work. They operate navigation locks and close miter gates, spillway gates and culvert valves. The typical hydraulic reservoir has a minimum volume capacity that is three times the maximum discharge rate of the system. This is mandated to ensure that there is never a shortage of fluid for any part of the system.

Hydraulic power systems on navigation locks and dams can be very prone to leakage into the waterway. This is especially the case as seals on the hydraulic cylinders age and deteriorate. Lock hydraulic piping leaks are also common occurrences when hydraulic pipes corrode, or locks are submerged during flooding. 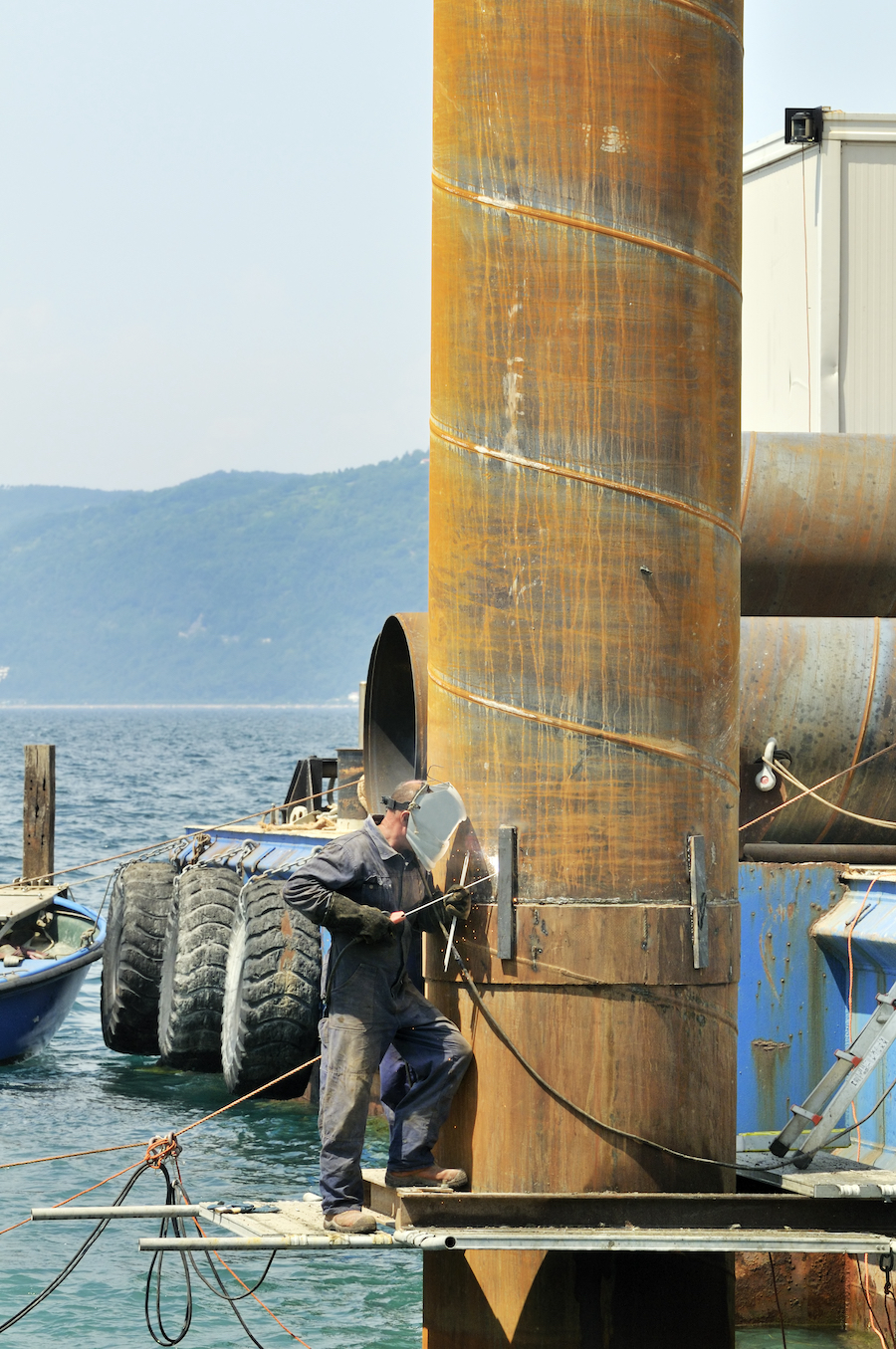 Below is a brief overview of each EAL type, the advantages and disadvantages of each, plus a side-by-side comparison chart to help you find the most suitable EAL for your application.

Also referred to as Natural Esters, these lubricants are made of vegetable, rapeseed (Canola), sunflower, coconut, palm or soybean oil.

Esters are synthesized by the reaction of an alcohol with an acid to form an ester.  This reaction process allows for the flexibility to customize the type of ester used for each application.

Made of synthetic, petroleum-based oil, HEPGs are created by the polymerization of ethylene or propylene oxide and contain hydroxyl groups that make them hydrophilic in nature.

Often referred to as classic mineral oil-based lubricants, HEPRs are synthesized hydrocarbons historically derived from crude oil meant to provide a low viscosity base oil that is readily biodegradable.  However, more recently, HEPR type base stocks from renewable sources have been developed and are being offered by some manufacturers.

Choosing the most suitable EAL depends on the end-user application. See the two charts following on the next page for a quick side-by-side glance comparing features for all four EAL types and standard petroleum-based lubricant. (Please also reference the glossary at end of this paper for definitions of product features used in the table.) 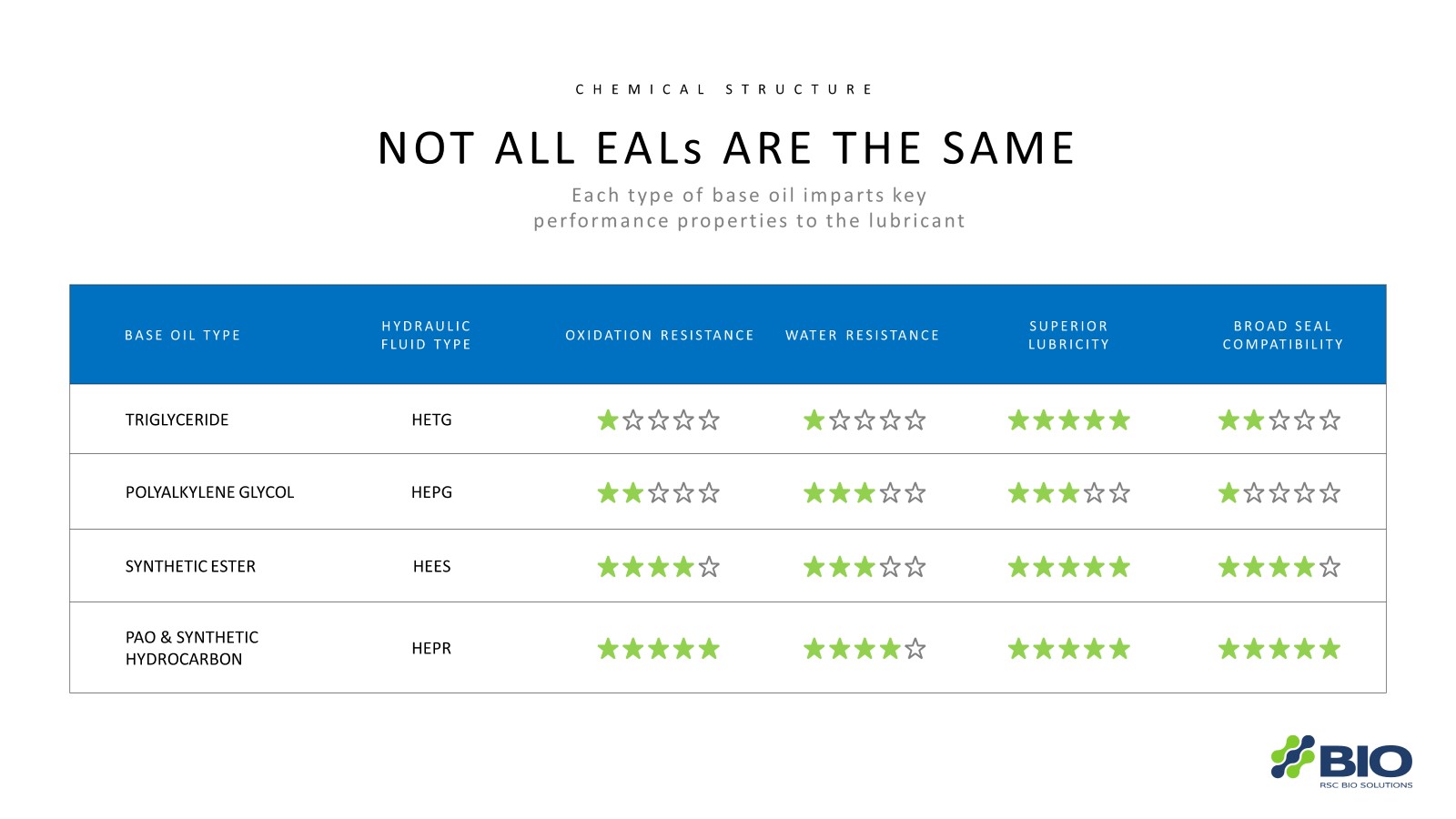 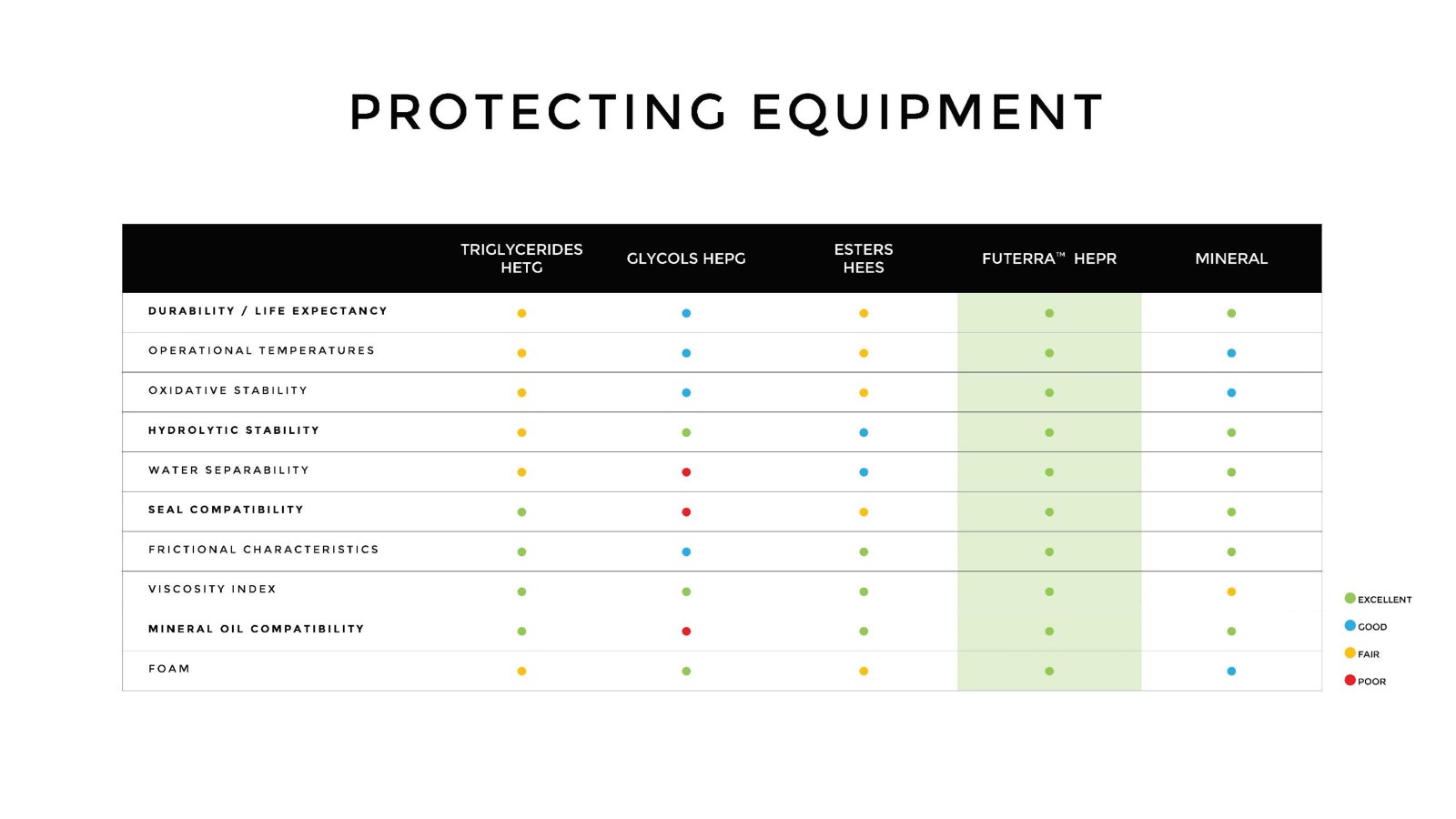 A grease is a type of lubricant that is composed of base oil, thickener such as lithium stearate (soap), liquid performance additives and solid extreme pressure additives.  The base oil provides lubrication, acts to solubilize both thickener and (liquid) performance additives and determines upper and lower operating temperature performance and has a direct effect on low temperature pumpability.  Thickeners improve the ability of the grease to remain in the application, determine chemical compatibility (when using hydrocarbon base oils), and define upper operating temperature). Additive selection determines oxidation resistance, corrosion inhibition, water stability, water wash-out & spray-off and film strength as well as extreme pressure enhancement.

Greases perform an important role in systems including lubricating and maintaining contact with moving surfaces and keeping base oil & additives in place in applications that are not sealed. Typically, when greases are exposed to force of gravity, centrifugal forces, extreme pressures and environmental contaminants such as (sea)water, metals, or dust, greases provide effective lubrication under such forces, contaminants and operating temperatures.

RSC Bio Solutions assessed the performance properties of predominant grease types and brands mentioned in the 2018 INDC study. Our technical team also took note of the deficiencies and concerns referenced and formulated new EnviroLogic WREP (Water Resistant, Extreme Pressure) grease products to solve the tough challenges for wire rope and USACE civil works assets which were introduced in 2019 and 2020 and are now considered best in class. 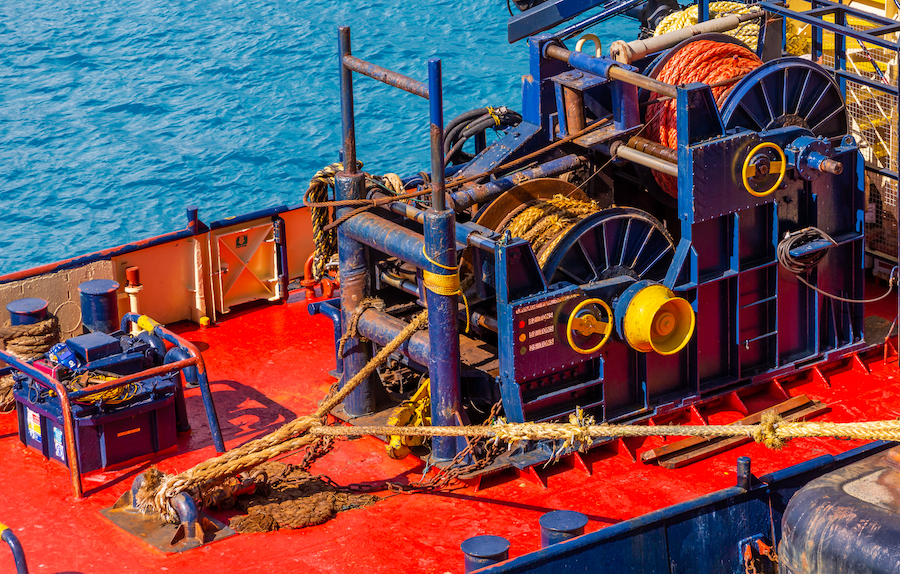 The most utilized type of grease for Marine and civil works projects is lithium complex type.  Not all lithium complex type greases are the same and it is important to distinguish them by the type of base oil utilized as the grease backbone as well as the additive packages which deliver in application performance characteristics.  Of particular importance in Marine and Civil Works application are the following properties of a grease:

Greases that are EALs are minimally toxic to the environment, not bio-accumulative, and biodegrades by 60% or more within 28 days. The performance of EnviroLogic Grease 2 WREP meets or exceeds the performance of the Lithium Complex greases offered by well-known major grease manufacturers.

The lubricant industry generally describes an Extreme Pressure grease to be able to:

Steel Corrosion protection in both distilled water and in 5% salinity synthetic sea water.

Water Spray Off describes how well the grease will remain on the gear teeth or exposed bearing when exposed to pressurized water spray or heavy rain.

Water Washout measures incidental contact of the grease with water. 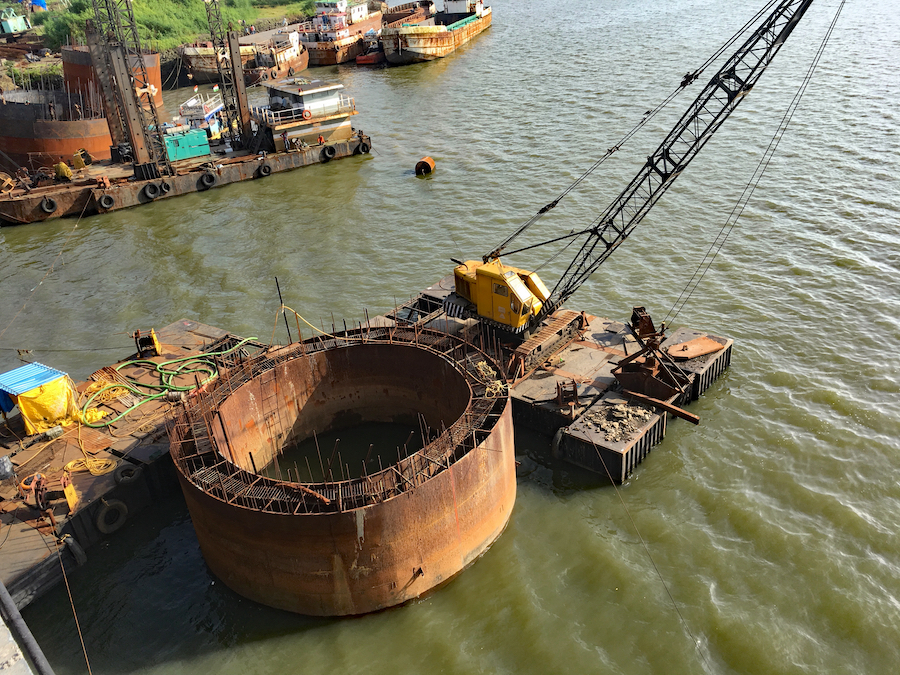 Greases Side by Side Comparison

The table above provides a Side-by-Side comparison of commercially available greases.

Steel corrosion protection is very important in marine environments as well as in areas of the work that use salt to maintain roads in winter. Only one of the greases described on the previous slide passes without any corrosion in the D 1743, Salt fog, humidity cabinet and D 5969 test using 5% synthetic sea water tests.

Copper corrosion is an indication that either there is not any active sulfur in the grease or that the active sulfur has been passivated. Sulphur in a lubricant is used to improve extreme pressure performance.  1b is a passing result.

Water spray off and water washout are tests that predict the ability of the grease to remain on the application when the grease experiences direct contact and indirect contact with water, respectively. The lower the result the better the grease performance.

In order to be an effective lubricant, grease does have some oil that separates from the thickener. The oil separation results described in the table are reasonable.

EnviroLogic Grease 2 WREP is an Environmentally Acceptable Lubricant (EAL) that performs in a similar manner to the mineral oil-based grease. It provides outstanding steel corrosion protection when compared to all of the above greases, which broadens the applications for this grease to include cold climates as well as marine environments. 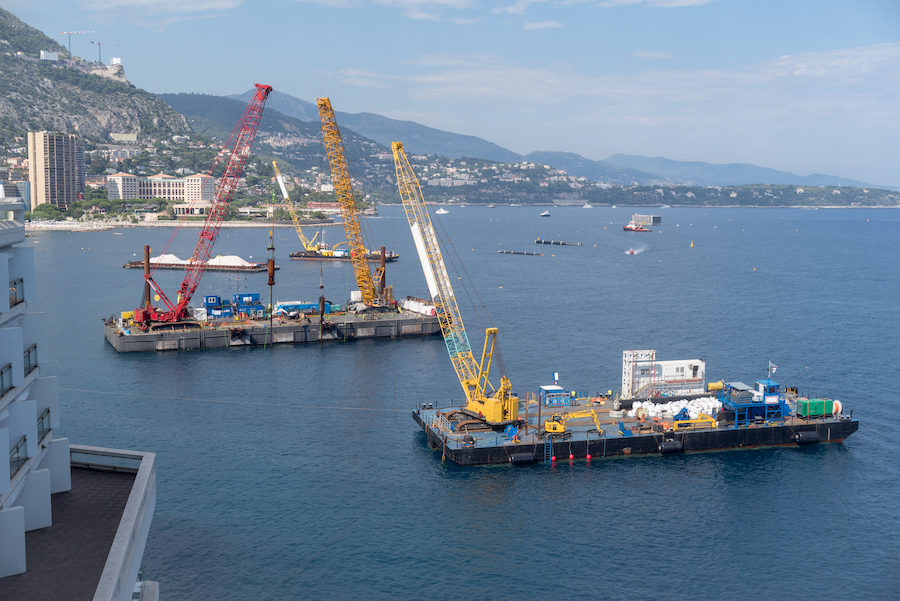 Environmentally Acceptable Lubricants are not only mandated by the EPA and preferred and often specified by the USACE in many civil works applications, but they also perform equivalently or better than petroleum lubricants. EALs prevent wear and tear on parts, reduce friction (for improved performance), reduce heat and prevent corrosion. EALs are safer for employees to handle and have less impact on the environment.

Many factors should be considered when evaluating which EAL best fits your needs including operating temperature and pressure, seals/elastomers, water ingress, fluid life, preventative maintenance cycles and spill/discharge potential.

The benefits of switching to EALs identified in the USACE Civil Works study were identified as:

Definitions of features used as a basis for comparison for EAL technologies.

Ecotoxicity – the potential for biological, chemical or compounds to affect ecosystems