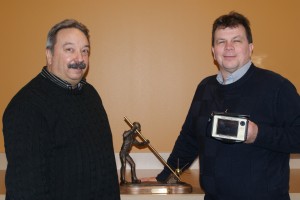 The engineers and researchers received the award for the Thermal Integrity Profiler (TIP), an instrument that uses the heat generated by curing concrete to reveal the shape of cast-in-place concrete foundations. The initial research for the TIP was conducted at the University of South Florida.  PDI formed a joint venture with Foundation and Geotechnical Engineering (FGE), of Plant City, FL to design the instrument and take it to market.

The TIP measures concrete temperatures during the curing process either by a probe inserted into access tubes or by Thermal Wire® cables embedded in the concrete.  “The TIP is an innovation for the deep foundation testing market.  It overcomes many of the limitations associated with other non-destructive testing methods, providing an evaluation of the entire cross-section, something that can’t be done with those other methods. The TIP test is completed within typically 12 – 48 hours after casting the shaft, thus allowing for an accelerated construction schedule. In contrast, other testing methods are not done until typically 5 – 7 days after casting,” said George Piscsalko, Vice-President of Pile Dynamics and one of the award recipients, adding “We are quite honored to have received such a prestigious award.”

In addition to detecting problems either inside or outside the reinforcing cage, as Piscsalko alluded to, TIP is unique in its capability of assessing the positioning of the reinforcing cage and the thickness of the concrete cover.   An additional innovative aspect is the automation of the data collection process when THERMAL WIRES are used.

The Construction Innovation Forum (CIF), who presented the award, is an international, non-profit organization that encourages and recognizes construction innovations. The 2013 NOVA winners, selected from more than 700 nominations from 20-plus countries, were announced November 12 at the Annual Construction Users Roundtable (CURT) National Conference.  CURT represents more than 100 of the United States top construction purchasers, the majority of which are Fortune 500 companies.

“Each year since it was created in 1989, the NOVA Awards honor top innovations in construction from around the world that increase quality and efficiency and reduce cost,” said Rasha Stino, CIF Vice-Chair. “An expert jury carefully selects award-winning innovations with the assistance of leading engineers serving as investigators.  CIF congratulates George Piscsalko, Gray Mullins and Dean Cotton, as well as Pile Dynamics, Inc., the University of South Florida and FGE.”

“It is exciting to see the industry recognize a game changing technology”, said Gina Beim, marketing director of Pile Dynamics.   “In the past year we saw the interest in Thermal Integrity Profiling increase at a significant pace”, she added.

After several months of successful testing on drilled shafts, the TIP is now being employed in the evaluation of augered cast-in-place piles, jet grouting columns, soil nails and micropiles.  Pile Dynamics expects the technology to be adopted in more and more countries in the next few years, and is forecasting the number of foundation elements to be tested with TIP to at least double in 2014.

“We are honored to receive the prestigious NOVA award for the Thermal Integrity Profiler.  It is a humbling distinction to receive recognition for this innovation in the construction industry.” said Dean Cotton, one of the awardees.

PDI manufactures electronic instruments that evaluate the quality and control the execution of deep foundations.  Its systems are extensively used around the world. For more information visit www.pile.com/pdi.