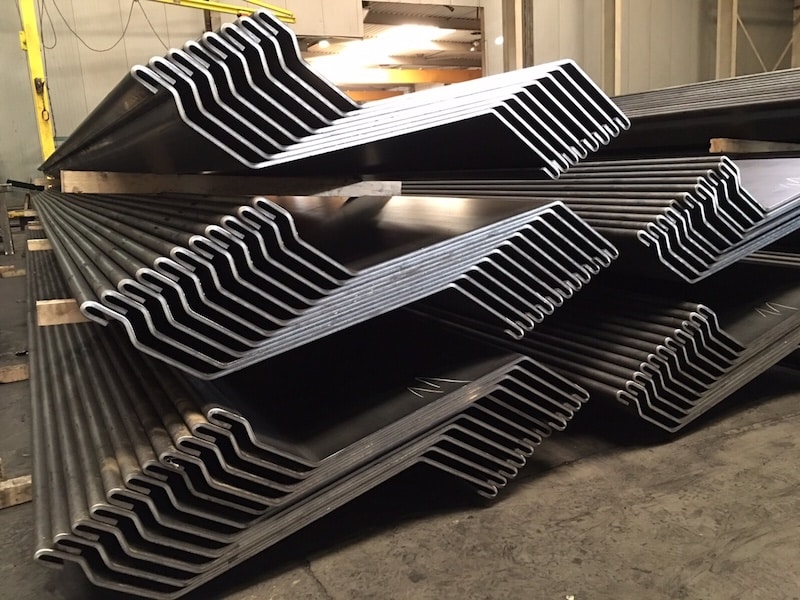 Is there a difference? Yes, of course, there is.

Hot-rolled steel sheet pile has been around for a century, being used successfully all over the world, in every kind of project and no one can deny its acceptance and viability.

On the other hand, cold-formed steel sheet pile has less history, and less undisputed acceptance. In this report, I will try to illustrate the differences, and, if I seem to defend cold formed, it is only because cold formed has been questioned more and is subject to much more skepticism because of its recent development and shorter historic record, so I will be trying to address these issues.

Both play a very important role in the pile driving industry.

Steel sheet pile was originally a flat-sheet design used for cellular cofferdams and structures. This design is as important today as the early 20th century, and in some ways, with the advent of a patented process of open-cell bulkheads and cofferdams will ensure its importance for many years to come.

Hot-rolled has evolved from flat sheets to U-shaped sheets, to the Z-shaped sheets we install today and will remain a viable product for many years to come.

The first cold-formed I heard about was a mill designed and owned by Krupp Steel. This mill was sold in the late 70s to the Canadian company Casteel and moved from Germany to Canada and later to the United States.

The first cold-formed steel sheet pile sold in America was in the mid 70s by an agent for Krupp Steel. Actually, there was over a half-mile sold to McDermott Corp. for bulkheads in New Orleans and Amelia, LA, and Gulfport, MS on the industrial canals. All these bulkheads are still in use today, over 40 years later.

So what is the difference between hot-rolled and cold-formed? There are a couple of differences. Hot-rolled is manufactured in a single- or two-step process heating pre-rolled steel beam blanks to such a high temperature that it allows it to be easily shaped and formed into sheet pile.

Cold-formed is manufactured in two steps. First, hot-rolled steel coil is manufactured and later it is run through a mill, which forms the coil into the steel sheet pile sections. Although this combines two processes, the method, as I will point out later, has an advantage of economy and scheduling in the cold-formed process.

Both sections of steel sheet pile (hot-rolled or cold-formed) have the same steel properties and are usually rolled to the ASTM 572 grade 50 specifications with identical properties. So what’s the big difference? The basic difference is the interlock.

ALL cold-formed interlocks are basically similar.

But hot-rolled are usually different and one manufacturer’s generally won’t interlock with another’s unless a transition piece is fabricated.

Most cold-formed interlocks of similar size will interlock regardless of the manufacturer.

I describe cold-formed interlocks as a-hook-and-a-grip.

The hook is captured by the grip and when pile is driven cannot be dislodged. In my opinion, it may be a better feature than the traditional ball-and-socket but you have to see the hook-and-grip up close to really appreciate the technology.

Cold-formed interlocks are looser. Therefore, thread easier and drive easier, which is especially an advantage when driving and pulling temporary sheets. This feature can speed up the process in permanent installations.

A major Southeastern pipeline contractor uses hundreds of tons of cold-formed sheeting exclusively for temporary trenching projects because, in his opinion, the interlocks perform much better in multiple driving and pulling.

On the other hand, many contractors feel it takes a more precision to drive the cold-formed piling plumb (vertically). It can be done but the installation crew has to be a bit more precise. How well any type of pile drives is directly proportional to the experience and techniques of the pile driving crew. As to water tightness, no interlock is water tight. All interlocks achieve a leak resistance by the pressure exerted on the wall by hydraulic pressure and then fines and materials being trapped within the interlock.

The Larssen interlock appears to be tightest. My opinion is that compared to ball and socket the cold-formed interlock can hold its own. There is about the same interior surface area actually touching in both hot-rolled and cold-formed so generally both should be about equal under hydraulic pressure. In very wet or water conditions, hot-rolled may seal up faster where there isn’t as much load.

Buying Steel Pipe in 2023: What You Need to Know