J.F. Brennan Company, Inc. has been a marine professional since 1919 with a specialty in marine construction and environmental remediation for inland waterways throughout the United States. Headquartered in La Crosse, Wisconsin, J.F. Brennan works with both government agencies and private owners providing services such as dredging, diving, dam repairs, pile driving, railroad bridge repairs, in-situ capping and more. “About 60 percent of our business today is remediation dredging to clean up contaminated sediments,” explains Glenn Green, Director of Marketing and Sales for J.F. Brennan. 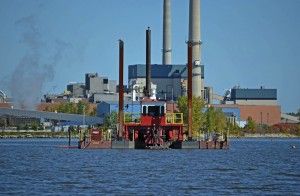 In addition to its lock and dam work for the U.S. Army Corps of Engineers, J.F. Brennan is one of only three contractors in the nation on contract to complete remediation dredging for the Great Lakes National Project Office (GLNPO). Responsible for restoring and protecting the entire Great Lakes Basin, GLNPO was the first-ever geographically-based jurisdiction of the Environmental Protection Agency (EPA). Other types of projects completed by J.F. Brennan include underwater inspection, millwrighting and structural construction on hydro dams and bridges, the building of harbors and even dredging for cranberry marshes.

In 1993 J.F. Brennan realized that they needed to work with a dredging manufacturer that could accommodate their needs with a customized dredge and were introduced to DSC Dredge, LLC. “DSC’s willingness to modify their dredges to our needs is why we have stuck with them for so many years,” says Green. “Prior to the DSC dredges, we had more conventional closed-loop underwater dredges, but all those have since been sold and the only units we have now are swinging ladder cutterhead dredges from DSC Dredge.”

J.F. Brennan’s fleet is now comprised of eight DSC dredges—six Moray Class dredges with 8-inch (200-mm) discharges and two larger Barracuda Class dredges. Both models are convertible from swinging ladder to conventional design. “All of our dredges are customized to meet the specific challenges we regularly encounter,” says Green. 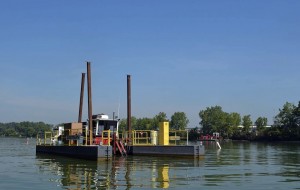 DSC specializes in outfitting dredges to meet the exact specifications of their customers. In order to meet the needs of J.F. Brennan’s typical job site, the dredges feature high-viscosity cutterheads, boosters and a larger cab. In order to ensure extreme accuracy, which is required for remediation dredging, DSC developed a special articulated ladder that would allow the cutterhead to be parallel with the bottom surface. To increase buoyancy, especially helpful for shallow water projects, DSC increased the size of the wing tanks. In addition to those upgrades, J.F. Brennan also wanted the hydraulic systems relocated from their standard position in the wing tanks in the hull to the deck of the dredge.

“DSC hasn’t just built new dredges for us; they have actually helped us modify current dredges that we have as well. The first dredge we bought from DSC Dredge was a 12-inch swing ladder cutterhead dredge, we call it our ‘Michael’. It’s been around for about 20 years and is still operating with a few modifications and improvements over the years,” says Green.

“After twenty years, the relationship with DSC is a special one,” comments Green. He notes in particular the efforts by the DSC Dredge engineering team lead by Billy Wetta and Damon Gonzales. “We have worked closely with all of them to come up with what we need over the years. Our Head of Remediation, Victor Buhr, was instrumental in starting the initial relationship with Tommy Wetta at DSC Dredge. Over the years, we have worked very closely with his sons Billy and Bobby—Billy on the engineering end and Bobby on the sales end to really customize and modify these dredges to meet the particular requirements that we have on our jobs.”