The ultimate objective of any foundation is to transfer load from a structure to the soil below it. The foundation must do this while neither overstressing the soil to failure nor compromising its own structural integrity. In the case of driven piles, the impact method of installation adds the requirement that the pile not be overstressed during driving as well. The goal of the designer is to achieve all of these objectives in an economical fashion.

The following design approach should be used to determine the optimum foundation alternative:

Establishment Of a Need for A Deep Foundation

The upper soil strata are too compressible or too weak to support heavy vertical loads. In this case, deep foundations transfer loads to a deeper dense stratum and act as toe bearing foundations. In the absence of a dense stratum within a reasonable depth, the loads must be gradually transferred, mainly through soil resistance along shaft. An important point to remember is that deep foundations transfer load through unsuitable layers to suitable layers. The foundation designer must define at what depth suitable soil layers begin in the soil profile.

Deep foundations are often required when scour around footings could cause loss of bearing capacity at shallow depths. In this case the deep foundations must extend below the depth of scour and develop the full capacity in the support zone below the level of expected scour. The geotechnical analysis of bridge foundations should be performed on the basis that all stream bed materials in the scour prism have been removed and are not available for bearing or lateral support. Costly damage and the need for future underpinning can be avoided by properly designing for scour conditions. 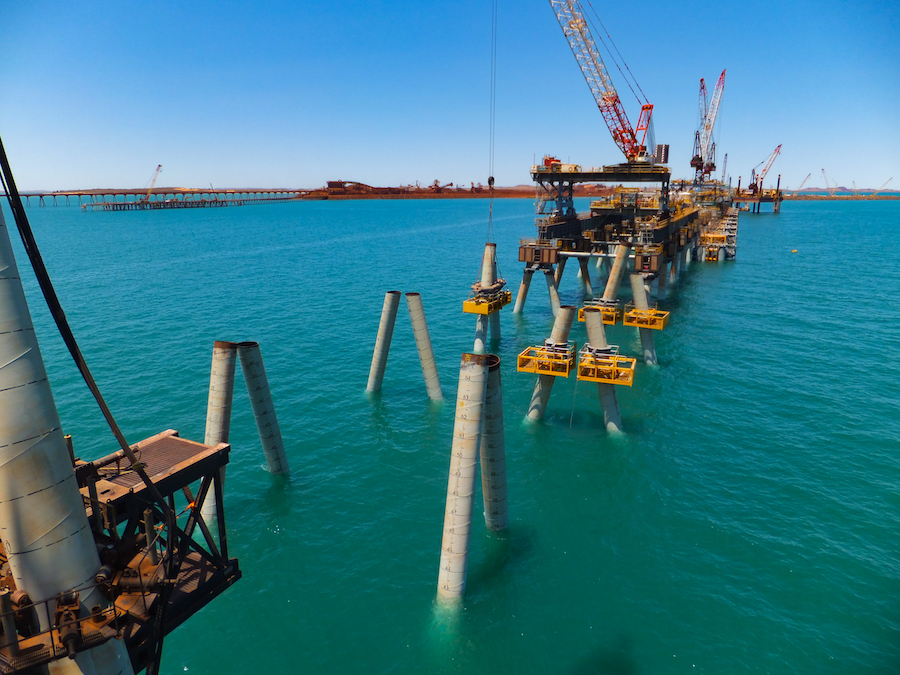 Deep foundations may be needed to support structures adjacent to locations where future excavations are planned or could occur. This is often the case in urban areas. Use of shallow foundations in these situations could require future underpinning in conjunction with adjacent construction.

In many instances either a shallow or deep foundation alternative is technically feasible. Under these circumstances, an evaluation of the shallow foundation should include:

Pile groups of a foundation should be proportioned to permit only an acceptable amount of settlement in support of the maximum combination of loads. This includes, but is not limited to:

The allowable load from pile to soil should be determined by a recognized method of analysis. This will include an evaluation of three basic limit states or potential failure modes including:

Piles must penetrate or bear on acceptable material a sufficient distance to develop the required geotechnical capacity. They must be driven either plumb or to the batter specified. The toe of the pile should be protected from damage during installation. Damaged or broken piles should neither be used nor accepted for payment.

Static pile capacity computations are necessary to estimate the number of piles and the required pile lengths both for the design of substructure elements and for ordering piles of the correct length from the supplier. The ultimate static load capacity of an individual pile and of a pile group is the smaller of the structural capacity of the pile(s), or the capacity of surrounding medium to support the loads being transferred to it from the pile(s).

Static load tests can also be used to determine pile load capacity. Because load tests are expensive and time consuming, they cannot always be economically justified. Alternatives to static tests include dynamic tests, Osterberg cells, or Statnamic™ tests. The designer should carefully evaluate the appropriateness and correct interpretation procedures of the latter two tests.

Sometimes, two static analyses are required for a design. First, it is necessary to determine the number and length of piles necessary to support the design loads. The second analysis is performed to determine the total driving resistance the pile will encounter which helps in determining the necessary capability of the driving equipment.

Effective overburden pressure at a given depth below ground is the stress at that depth due to the soil weight above.

Bearing Capacity of Piles on Rock

Pile foundations on rock are normally designed to carry large loads. For pile foundations which are driven to rock, which include steel H-piles, pipe piles or precast concrete piles, the exact area of contact with rock, the depth of penetration into rock as well as the quality of rock are largely unknown. Therefore, the determination of load capacity of driven piles on rock should be made based on driving observations.

For end bearing piles on rock of fair to excellent quality, the structural load capacity of the piles – based on allowable (design) stress for pile material – will generally be lower than the capacity of rock to support loads. Therefore, small diameter piles supported on fair to excellent quality rock may be loaded to their allowable structural capacity. Piles supported on soft weathered rock, such as shale or other types of very poor or poor quality, should be designed based on the results of pile load tests.

Because of the considerable influence of construction procedures on the behavior of pile foundations, the methods described in this article lead to successful designs of deep foundations only if adequate construction monitoring techniques are used. Inspection considerations should be an integral part of the design and construction of any foundation. Load tests, wave equation analysis, or dynamic monitoring for construction control and monitoring should be used to check the validity of the static design.

What is Static Load Capacity?

Why do you compute Static Pile Capacity?

Static pile capacity computations are necessary to estimate the number of piles and the required pile lengths both for the design of substructure elements and for ordering piles of the correct length from the supplier. The ultimate static load capacity of an individual pile and of a pile group is the smaller of the structural capacity of the pile(s), or the capacity of surrounding medium to support the loads being transferred to it from the pile(s).