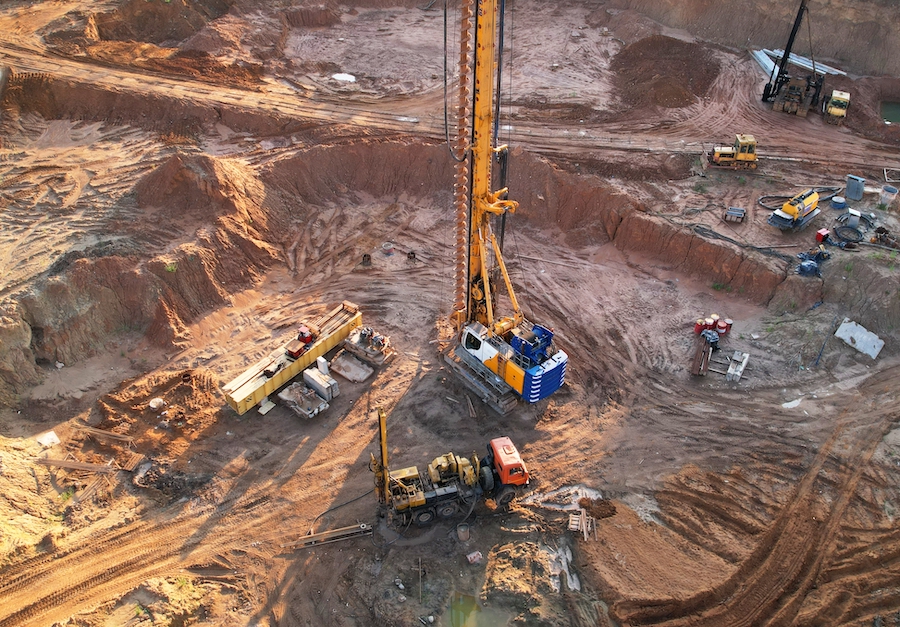 Depending on your project needs, your drilling and excavating work will require a variety of tools and equipment to get the job done.

While choosing these tools and equipment, everything from the location of the project to the type of soil and substrate to the moisture content in the ground will have to be considered.

Keep in mind that before the contract even reaches the billing stage the client should have already conducted all necessary inspections, core sampling, and other testing phases. All of this data should be available to you and your team as early as possible in the process. This information is crucial to determine the correct tools and equipment for the job.

Once you know the ins-and-outs of the location and the ground base, then you can decide how you’ll proceed with the excavation.

Rotary drilling is used to form a deep observation borehole, as well as obtaining representative samples of rock. Depending on where the job takes you and what kind of material you have to drill through, there are various rotary drilling options—including augurs, drilling buckets, and core barrels—to name a few.

Mechanical systems have been popular for many years, particularly because they’re simpler to operate and repair while still supplying enough power to the rotary system—meaning that there’s a fixed mechanical system attached to the drive shaft and that’s what is providing the power.

However, hydraulic systems are quickly gaining ground as a popular choice as well—mostly due to their ability to supply comparable power while offering more flexibility in the height of the tool. With the ability to move up and down the drive shaft, the rotary tool isn’t limited to the distance between the mechanical drive and the rotary table.

One of the more expensive hydraulic systems is the oscillator/rotator system. This setup utilizes a solid pipe casing that rotates around the drilling bucket while the excavating is in progress—this way, a downward pressure is exerted as the rotary table works away.

Another rotary drilling setup involves putting the rotary drill on top of the casing. These casing-mounted drive systems rely on a process called reverse circulation drilling in which the multifaceted rotary heads work away at the soil while an airlift moves the debris.

Due to the fact that tremendous torque is being applied in two directions at the same time, these types of setups require strict attention to the design of the drilling, as well as the layout of the location.

Believe it or not—even with the efficient drilling systems available today, manual excavation techniques are still being used by many contractors today.

For some types of jobs—like reinforcing or repairing the underpinnings of existing structures—manual excavation may be more cost-effective, as well as more efficient. And—in some cases—there may be a geological reason why manual excavation is required—like drilling through or removing a massive rock.

However, it’s important to note that any time workers are put below surface level for this kind of work, there are major safety considerations that must be put in place. Depending on the size of the drilling, you may have to reinforce the area to avoid potential collapse, redirect any groundwater below the workers, or even ventilate the area with fresh air.

On a final note about drilling systems—for some projects, a combination technique may be required—utilizing both manual excavation and mechanical and hydraulic drilling. For example, there may be workers beneath the soil surface who are guiding a clam or hydromill.

The most versatile machines are generally fixed to a moveable source, which could be anything from a truck to a crane. This will allow you to maneuver around the job site and even from location-to-location. Some drilling machines are still mounted to a fixed casing, though, which will affect the versatility of your machine.

Here are a few points to consider with mounting:

As some of the most common drilling tools used today, rotary tools offer multi-faceted surfaces that turn in order to bore into rock, soil, and other substrates.

Here are some of the most commonly-used rotary tools…

Augurs consist of some sort of spiralized cutting edge or blade that turns in order to work its way down into the drilling material. And they can be specialized for drilling into soil, slurry, rock, and other materials. One of the most important factors in an augur’s design—and how its chosen for a specific job—is its “flight,” or the blade-like feature that lifts the drilled material up out of the way. Depending on the project requirements, these flights may be closer together or farther apart, may be higher or lower in number, or may even have a slightly upward “scoop” shape to aid in the removal of the drilled material. Whatever the case, the goal is to ensure there is no unnecessary resistance from the substrate, which will put extra strain on the augur, as well as the drill.

Generally used for excavating loose soil instead of rock, a drilling bucket consists of a large “container” at the end of the rotary drill. This container has two openings opposite each other, which collect sand or soil as the bucket turns, then flaps inside the container to stop the material from falling back out. When each load is filled, the bucket is removed from the hole and the material is dumped out via a door at the bottom of the bucket.

Because drilling buckets are typically used for loose soil and some augurs are only designed for certain types of rock, these limitations make the core barrel a viable option for some drilling projects. These tube-shaped devices can be single-walled, double-walled, or even specially made for rock drilling. Core barrels function by producing a drilled core that is held in place by the friction of more material entering the tube, and it is lifted out of the hole with a fairly even rate of resistance. At this point, the material is brought out and deposited at the surface.

Generally used for widening the base in stable soil, a belling bucket moves underground with its cutting arms close to its sides, then the downward force causes the arms to extend and “cut” the soil as it continues to operate. One of the drawbacks to this method of drilling is that the bucket often requires extensive cleaning afterward.

As the name implies, percussion drilling tools rely on impact force rather than rotation. These percussion tools are especially effective for rocky ground, as the material is broken up rather than cored.

Like rotary tools, a clamshell grabber may be used to retrieve broken-up material once a percussion tool has been used.

Of course, clamshell buckets aren’t just for moving the leftovers once the drilling has taken place. On sites where rotary tools aren’t going to be effective, clamshells can often do the actual excavation, too.

Depending on the size and looseness of the soil, these buckets may be all that’s required, though they’re often used in conjunction with some other method.

Hammer grabs are often considered the “best of both worlds.”  With the jaws at the bottom of the hammer closed, it’s dropped into the hole and used as an impact tool to break up or loosen rock and soil. Then, either after being lifted or while still down in the hole, the jaws are opened and the loosened material is grabbed and lifted out.

Although they tend to be heavier and more expensive than other drilling tools, hammer grabs save time—considering that one machine can accomplish multiple goals at once.

For projects that require the underground material to be simply smashed, these specialty tools rely on their weight, gravity, and usually a long chisel point to break up heavy layers of rock. At this point, a clamshell can lift out loose pieces, or a hammer grab can finish breaking up the rocking before removing it.

Blasting is not the most common method of excavation, and the reasons should be obvious. In addition to safety concerns, there is the potential for weakening surrounding soil and structures. Blasting is also an expensive process due to the necessary expertise and permits.

Once the drilling has taken place, excavation continues with the removal of the material. While clamshells and grabbers are common methods, they’re not always going to be ideal. Other methods have been created, like airlifts and hydraulic pumps which actively force loosened material out of the shaft. The method you choose will depend again on the material you’ve excavated and the design of the project itself.

When airlifts or hydraulic pumps aren’t ideal for the project, another option is grouting. Grouting is generally used if the substrate isn’t very stable or if the hole was particularly large.

Soil mixing is another option. With soil mixing, the shafts are stabilized by columns of mixed soil cemented between them.

One of the most innovative ways of securing a shaft is to form a cement liner. If stability is expected to be a problem, a wider-than-necessary shaft is excavated and then filled in with concrete. Once the concrete is cured and hardened, then a new shaft is drilled into the concrete to the correct width. The end result is similar to a vertical “tunnel” of concrete that is supported by the soil around it.